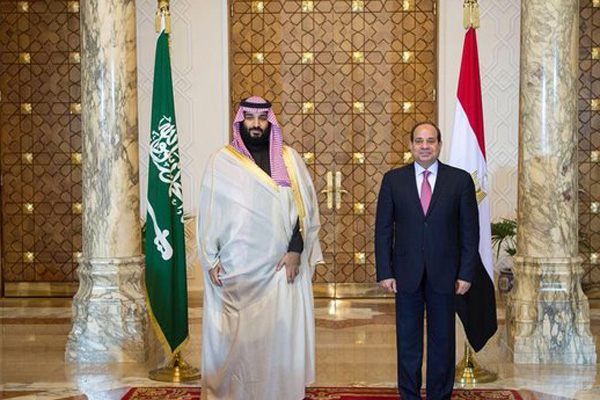 Saudi Arabia and Egypt have jointly set up a $10-billion fund to develop a planned a $500-billion mega-city and a business zone, with the latter committing over 1,000 sq km of land in the south Sinai region, said a report.

He was given a grand welcome on his maiden visit to Cairo by Egypt‘s President Abdel Fattah Al Sisi at the airport. As a special gesture the prince’s plane was escorted by Egyptian fighter jets when it entered Egypt’s airspace.

Prince Mohammed had previously announced plans for the 26,500-sq-km zone, known as Neom, at an international investment conference in Riyadh.

The project is aimed at turning the kingdom into a leading global hub that exemplifies the future of human civilisation by offering its inhabitants an idyllic lifestyle combined with exceptional economic prospects.

Set to be the world’s first independent special zone stretching over three countries -  extending across the Egyptian and Jordanian borders - Neom will become a new vibrant destination located in the northwestern region of Saudi Arabia, said the report.

Riyadh’s part of the new joint investment fund will be cash to help develop the Egyptian side of the Neom.

The mega-city, with its own judicial system and legislation designed to attract international investors, is to focus on industries such as energy and water, biotechnology, food, advanced manufacturing and tourism, it added.

The project is part of bold moves by Prince Mohammed to wean the world’s top crude exporter off oil revenues that include plans to float a portion of state oil giant Saudi Aramco.

Saudi Arabia plans to build seven cities and tourism projects, while Egypt will focus on developing the existing resort cities of Sharm El Sheikh and Hurghada, said the report citing the official.

It will also set up 50 resorts and four small cities as part of a separate tourism initiative announced last August and backed by the country’s Public Investment Fund (PIF), he added.

Work is set to start in 2019 on the kingdom's ambitious project and its first phase is likely to completed by late 2022.

The first official visit of Prince Mohammed paves way for potential investments between Saudi Arabia and Egypt in major sectors including oil and gas, electricity and infrastructure, reported Arab News.

In the power sector, the duo is working on an electricity interconnection project that aims to connect the power grids of the two countries to exchange a total capacity of 3,000 MW.

Egypt is contributing $600 million to the $1.6-million project, while other funders include the Kuwait Fund for Arab Economic Development, the Arab Fund for Economic and Social Development and the Islamic Development Bank.

Another ambitious project for the two countries is the Saudi-Egypt causeway that is aimed at linking the Saudi border to Sinai region. The entire project is expected to cost about $3 billion and to pass through Tiran Island at the entrance of the Gulf of Aqaba, said the Arab News report.

The construction of the King Salman Bridge is said to be the largest project of its kind in the world, it added.

Prince Mohammed also witnessed the signing of a MoU along with President Sisi to activate a SR60-billion ($16 billion) investment fund within hours of his arriving on the maiden overseas trip.

Following his three-day visit, the 32-year-old Saudi prince will next head to Britain on March 7 and then to the US, Riyadh's closest Western ally, later in the month.