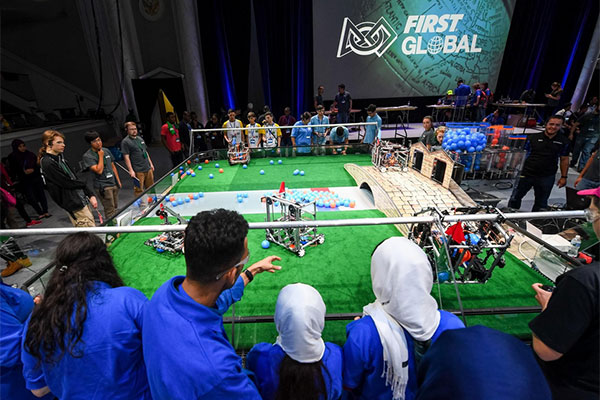 Dubai is preparing to host the 2019 FIRST Global DXB Challenge, a large gathering for creative young minds in the fields of robotics and artificial intelligence (AI), to be held for the first time in the region.

Running from October 24-27 at the Festival Arena in Dubai, the event will bring together more than 1,500 youth from over 191 countries to collaborate, create and compete for a better future.

Crown Prince of Dubai HH Sheikh Hamdan bin Mohammed bin Rashid Al Maktoum, Chairman of The Executive Council and Chairman of the Board of Trustees of Dubai Future Foundation, said that the importance of the event stems from its focus on engaging young people in finding solutions for future challenges. This narrative resonates with the city of Dubai, which has established itself as a global destination for creativity in a short period of time.

Hosting the event supports the UAE’s objective of creating an environment that attracts talent from around the world, empowers youth, especially innovators and creative thinkers, to create a positive future for humanity. This nationwide collaboration is a testament to the country’s efforts to promote collaboration in the fields of technology, innovation and science to better anticipate and prepare for the future.

One of the largest events of its kind, the FIRST Global Challenge seeks to encourage and empower youth with a passion for science, technology, engineering, and mathematics (STEM), develop their skills and equip them with the tools necessary to contribute to shaping the future. The Challenge aims to address the world’s most critical environmental issues such as wastage of water and energy, sustainability and pollution through a global robotics competition.

The UAE won the bid to host the FIRST Global Challenge at the 7th World Government Summit in Dubai last February in the presence of Mohammed Al Gergawi, Minister of Cabinet Affairs and the Future, Chairman of the World Government Summit, Vice Chairman of the Board of Trustees and Managing Director of the Dubai Future Foundation; and Rick Perry, US Secretary of Energy.

Al Gergawi said: “Hosting such a key global event underlines the UAE's keenness to promote global partnerships aimed at creating a better future for mankind. It is essential that we support creative talent and facilitate the dissemination of knowledge. The event is becoming increasingly important as it focuses on youth who are at the heart of the future of industry.”

Organised by the Dubai Future Foundation under the theme ‘Ocean Opportunities’, the FIRST Global Challenge focuses on developing robots to clean up the millions of tons of pollutants in the oceans produced mainly by factories, mismanaged sewage systems and marine activities, which adversely affect marine life and the environment.

The UAE is a world leader in supporting efforts to ensure the safety of the oceans and the sustainability of their biodiversity, promote joint action, and mobilise resources to maintain a clean marine environment and instil a culture of conservation. Ocean pollution is a global issue that requires collective global action.

At the 6th World Ocean Summit this year, the UAE pledged to participate in international cooperation to clean up the streams of 10 major rivers in Africa and Asia, and to tackle pollution with plastic waste in coastal areas of developing countries in Africa and Asia.

Teams featured in the FIRST Global Challenge were selected based on their results in a year-round series of qualifying events held around the world. The teams are made up of 4 to 5 students aged between 14 and 18. Each team receives a robotic kit and is tasked with assembling a robot able to address various issues related to ocean and marine life.

Previous editions have seen hundreds of student teams from around the world develop robots that help find solutions to challenges. The Washington DC 2017 event tackled the challenge of ‘Access to Clean Water’ while the Mexico City event in 2018 addressed ‘Sustainable Energy ‘. Both events drew widespread global interest. – TradeArabia News Service