Sulphur emission curbs to drive demand for LNG in shipping 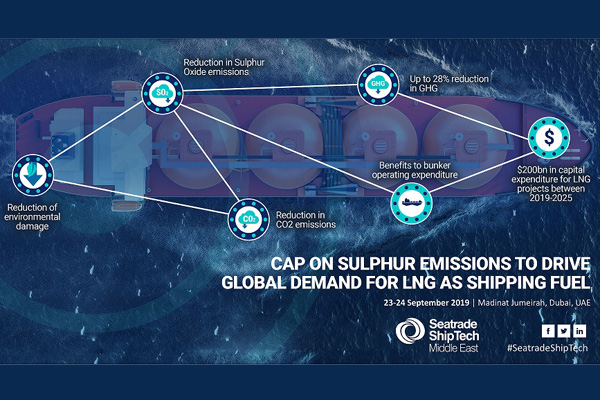 Demand for liquefied natural gas (LNG) as a conventional source of energy in the maritime industry will continue to grow because of its technological advantages in meeting the standards and requirements in limiting the emissions of sulphur, a greenhouse gas, said an expert.

According to marine fuel expert Sergey Ivanov, the global sulphur cap of 0.50 per cent which is set to be implemented by the International Maritime Organization (IMO) next year could drive the global uptake on LNG as bunker fuel.

The new regulation will have an impact on up to 70,000 ships around the world once it comes into effect on January 1, 2020. Shipping companies are expected to turn to cleaner fuels to meet their targets and global environmental commitments.

Ivanov, director of Marine Bunker Exchange AB, will highlight the several advantages of LNG as a marine fuel at the upcoming Seatrade ShipTech Middle East which will be held on September 23 and 24, at the Madinat Jumeirah in Dubai.

He noted LNG’s availability and competitiveness have the potential to lead as a major alternative to other heavy fuels once the new environmental regulation on maritime emissions is in place.

He emphasised: “While different technologies can be used to comply with air emission limits, LNG technology is the only option that can meet existing and upcoming requirements for the main types of emissions such as sulphur, nitrogen oxides, particulate matter, and carbon dioxide. LNG can compete price-wise with distillate fuels and, unlike other solutions, in many cases does not require the installation of additional process technology.”

Studies have shown that there is already a rising demand for LNG with more than 10 per cent of the world’s fleet to be powered by natural gas. The Middle East is one of the major sources of LNG, accounting for 94 million tonnes or about 30 per cent of the world’s supply coming from the region in 2018, with the UAE and Oman among the leading exporters.

Sergey further explained that there has to be sustained awareness about the benefits of LNG as it remains less known across the world, including the associated risks with it and how they can be dealt with such as safe and reliable logistical concepts, considering that there is an increasing transition as well to natural gas in general consumption including heating and electricity generation.

He commented: “To serve as a fuel on regular shipping or transport connections, LNG must be delivered where it is needed and when it is needed in the volumes required. It is, therefore, very important to address these matters – to have the necessary competence, knowledge and skills. Decision makers in governments, authorities and companies need to understand the subject of their decision-making and the consequences of the decisions they make when it comes to the application of LNG.”

Sergey will be speaking during a session themed ‘Powered by LNG’, along with Frank Harteveld, general manager strategic business development of Wärtsilä Gas Solutions; and Steve Esau, general manager of Sea\LNG Limited. To be moderated by Craig Eason, editorial director of Fathom World, the session is set to explore the impact of LNG to all stakeholders in the value chain including designers, shipbuilders and owners/operators.

Seatrade ShipTech Middle East is a two-day conference addressing the key future developments in the maritime industry. The only event during UAE Maritime Week dedicated to the latest shipping technologies driving the industry forward.

The two-day conference programme has been developed to highlight new industry regulations and technologies and their effect on ship operations, and what options are available for ship owners and operators for improving the performance of their vessels and achieving sustainability and operational efficiency goals.