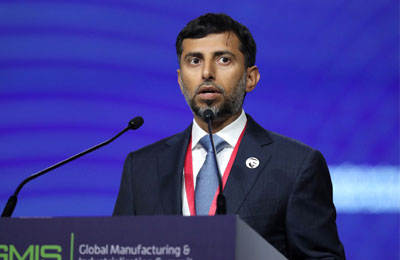 The Abu Dhabi Economic Vision 2030 was the central focus of a panel discussion on the second day of the Global Manufacturing and Industrialisation Summit (GMIS) in the Russian city of Yekaterinburg.

The vision provides for a shift from a dependency on hydrocarbon exports towards an advanced, knowledge-based and industrialised economy.

Al Balooshi said SMEs were an essential part of Abu Dhabi’s diversification plans and he explained how the emirate has been revising its policies and legislation to make it easier and more attractive for SMEs to invest in its industrial sector, including changes to labour and land lease regulations and the introduction of local content requirements.

Al Balooshi also revealed that a new industrial fund would be launched by the end of the year, which would support the growth of the SME sector. “We are putting a lot of effort into reducing the operational cost of SMEs and entrepreneurs,” he said.

Al Remeithi detailed how Emirates Steel has developed in tandem with Abu Dhabi’s diversification ambitions and, having supported the UAE’s construction boom; it was now looking to become a catalyst for a downstream metals industry by increasing its flat steel production in the next few years.

Al Remeithi also mentioned how Emirates Steel was supporting Abu Dhabi’s environmental initiatives and had reduced its carbon dioxide emissions by 40 per cent through a joint carbon capture project with Abu Dhabi National Oil Company (Adnoc). He said he believed hydrogen could replace natural gas in the steel production process in the not-so-distant future.

In addition to this panel discussion, thought leaders from across government, industry, and academia have gathered in Yekaterinburg to engage in debates across more than 40 sessions focusing on critical topics related to the manufacturing sector, including sustainability in manufacturing, circular economy, food security, future-cities, cybersecurity, the evolution of 3D printing, and their role in achieving the 2030 Agenda for the Sustainable Development Goals (SDG).

A joint initiative of the UAE and the United Nations Industrial Development Organization, GMIS is the world’s first cross-industry and cross-functional platform that unites manufacturers, governments and non-governmental organisations (NGOs), technologists, and investors to build a roadmap towards investing in capabilities, fostering innovation and developing the skills needed to position the manufacturing sector at the forefront of global economic growth and a key driver to advance the 17 SDGs.  – TradeArabia News Service