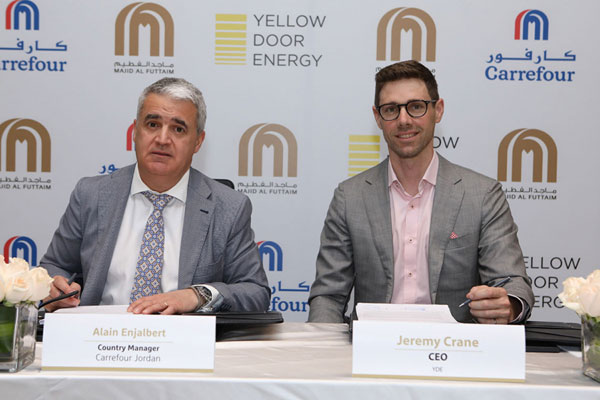 The 17-megawatt build-own-operate-transfer (Boot) wheeling agreement will provide Carrefour stores located in Amman, Zarqa, Madaba and Al-Salt with 29 gigawatt-hours of clean energy in the first year of operation, meeting 100 per cent of the retailer’s electricity needs in those areas.

Boot is a form of project financing, wherein a private entity receives a concession from the private or public sector to finance, design, construct, own, and operate a facility stated in the contract.

Alain Enjalbert, the country manager for Carrefour Jordan at Majid Al Futaim Retail said: "Sustainability plays an important role in our business as illustrated by our Net Positive strategy, which aims to over compensate our water consumption and carbon emissions resulting in a positive corporate footprint by 2040."

"The Boot solar agreement will prove not only integral to helping us achieve our goals but also halving our energy costs, allowing us to pass the savings on to our loyal customers across Jordan," he stated.

As the Boot solar provider, Yellow Door Energy will invest in, design, construct, commission, operate and maintain the solar park.

Located east of Amman, the solar park will span an area of 366,000 sq m and will comprise 300,000 solar panels. The park is expected to be completed and generating clean energy for Carrefour Jordan by the spring of 2020.

Rory McCarthy, chief commercial officer of Yellow Door Energy, said: "We are proud to support Carrefour and Majid Al Futtaim in their sustainability endeavors while helping them reduce energy costs and improve competitiveness."

"Our solar park epitomises Carrefour’s sustainability leadership and we hope it will inspire other retailers and multi-nationals to transition to solar power," he stated.

Jordan is a leader in the Middle East for its rapid adoption of renewable energy. Owing to the nation’s forward-thinking wheeling legislation, Yellow Door Energy will be permitted to build the solar park outside of Amman and send clean energy to the grid.

Furthermore, by 2020, one-fifth of the country’s energy will be generated through renewables, as stated by His Majesty King Abdullah II of Jordan at the World Economic Forum on the Middle East and North Africa in April 2019.-TradeArabia News Service