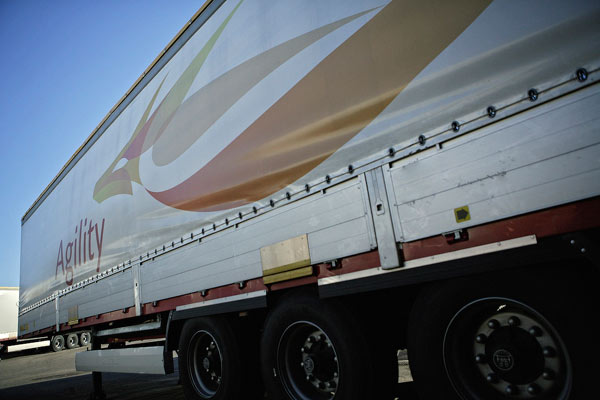 Agility vice chairman and chief executive officer Tarek Sultan said: “Again a good start for our company this year, though we are witnessing an environment where growth is slowing.”

“We have seen good improvement across the board, and are accelerating our efforts to achieve our targets. On a reported basis, EBITDA increased 22.8 per cent and net profit improved 7.3 per cent,” he added.

Sultan said Agility’s core logistics business, Agility GIL, continues making significant and important investments in digital transformation that will position it for long-term success and differentiation in the market.

He noted that the company also continues to invest in its infrastructure group companies, each of which is pursuing a growth strategy.

Q1 GIL revenue was affected by currency fluctuations. On a constant currency basis, GIL revenue increased 3.4 per cent vs the same period a year earlier.

The net revenue increase was driven primarily by ocean freight and contract logistics, offsetting decreases in project logistics and road freight. On a constant currency basis, GIL net revenue growth was 5.1 per cent. GIL’s overall Q1 net revenue margin was 23.8 per cent against a 23.3 per cent a year earlier.

Q1 contract logistics performance was strong, with revenue growth of 3.6 per cent. The Middle East/Africa region (mainly Kuwait, Dubai, Egypt) was the key driver of growth and improved margins.

GIL’s digital strategy involves the development of systems and technology that will improve productivity, differentiate its products, and position it as the industry’s leading innovator. By accelerating its digital transformation, GIL will enhance customer and supplier connectivity, create innovative customer solutions, increase the efficiency of its business processes, and enable comprehensive business insight.

The Infrastructure group reported EBITDA of KD32.5 million ($106.8 million) (excluding IFRS 16 impact), an increase of 7.4 per cent in Q1, on a revenue increase of 10.7 per cent.  Agility is investing in these companies to drive its future growth.

Agility Logistics Parks (ALP) reported 23 per cent revenue growth for the quarter, an increase that resulted from strong performance at new facilities completed in late 2018, as well as yield improvement at existing facilities.

In Kuwait, ALP’s focus is driving the efficiency of existing assets and identifying new opportunities based on market demand.

With respect to Africa, ALP is currently developing 68,000 sq m of new facilities in Ghana, Mozambique and Ivory Coast, with another 36,000 sq m opening in Nigeria at the end of the year and a planned further 100,000 sq m opening during 2020.

Tristar, a fully integrated liquid logistics company, posted 13.3 per cent revenue growth in Q1, the main drivers for this growth are road transport and warehousing operations, in addition to the shipping business.

Tristar continues to grow its business with existing customers as well as expand its customer and geographical reach. In the first quarter, Tristar signed a five-year charter contract with Shell – with five optional years – to deliver six medium-range products tankers by 2020, it stated. – TradeArabia News Service