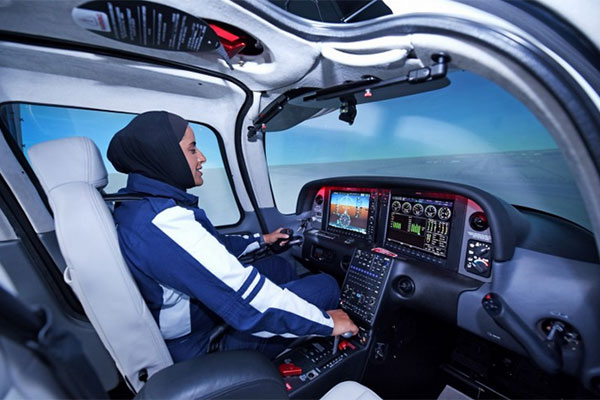 The Emirates Flight Training Academy (EFTA) is showcasing its cadet training programme and two of the 27 aircraft in its fleet of Cirrus SR22 and Embraer Phenom 100EV aircraft) the ongoing Dubai Airshow at Dubai World Central.

Capt Abdulla Al Hammadi, vice president Emirates Flight Training Academy said: “It has been an extremely fruitful and rewarding journey as we continue on this path of providing world-class aviation training.

“We have crossed several key milestones in these two years in terms of cadet progression, new partnerships, taking delivery of our full fleet of aircraft, inducting advanced technology, and building up our facilities. We are looking to attract and train young and keen talent, who will become career-ready after graduation and help address the regional and global shortage of skilled commercial pilots.”

EFTA is currently running at peak with 252 students, including 11 female cadets, drawn from seven nationalities. The Academy has recently inducted its 17th cohort, with the first cohort of around 17 students all set to graduate in March 2020.

EFTA has just received its sixth spanking-new simulator, which now graces the massive training facility near Dubai World Central. The Academy was the launch customer for these six mini full-motion flight simulation training devices, which are the first of their kind in the global aviation industry. The six simulators, three each, have been modelled and configured for training cadets on the two aircraft types in its fleet.

This year, 27 cadets completed their first solo flights on the Cirrus SR22 and have clocked up a collective 3,671 hours and 19 minutes of flying this fleet of 22 aircraft. Each cadet is required to complete a total of 185 hours flying aircraft.

The first female cadet to fly solo, Latifa Al Mansoori, took to the skies in September. This followed a historic milestone for EFTA: the first-ever solo flight earlier in the year.

The Academy has a unique and innovative approach to training, with cadets first learning to fly the single-engine piston Cirrus aircraft, and then progressing to the twin-engine Embraer Phenom 100EV, of which EFTA has five. This gives cadets more experience on jet aircraft and a head-start for a career in commercial airlines. EFTA is looking to celebrate another major milestone: the first cadet to fly solo on the Phenom aircraft.

EFTA has had an action-packed 12 months. The Academy participated in the Bahrain Airshow and signed a partnership with National Aviation Academy (TAYARAN), a not-for-profit vocational training institute in the Kingdom of Saudi Arabia to share expertise and establish cadet exchange programmes.

The multi-million dollar facility is spread over an area of over 184,000 sq m, with ground school classrooms, ground based simulators, a young and modern training aircraft fleet, a 1,800 metre dedicated runway, an independent air traffic control tower and a maintenance centre in addition to accommodation and recreational facilities for cadets. – TradeArabia News Service