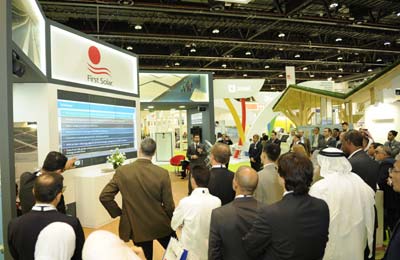 “The Mena region is in a truly unique position to solve the challenge of water security,” remarked Raed Bkayrat, vice president of development for Saudi Arabia at First Solar, which is participating in WFES.

“While the region is quite arid, it also has one of the highest solar irradiances of any region in the world, and much of the population has ready access to seawater.  Accordingly, solar photovoltaic projects are proving to be sustainable means of powering water desalination in the region, ensuring that the supply of clean water will keep up with the region’s increasing demand for it,” he noted.

Masdar took a major step by launching a pilot project to test energy-efficient desalination technologies – such as reverse osmosis and forward osmosis – powered by renewable energy.

The company awarded contracts to Abengoa, Degremont, Sidem/Veolia and Trevi Systems to build the desalination plants, which are expected to enable the implementation of cost-competitive desalination plants powered by renewable energy in the UAE and abroad.

“Engaging different sectors of the industry is really crucial to bring forward innovative solutions, as well as pilot projects that demonstrate to governments the value of new integrated systems,” Bkayrat added.

Along with WFES and IWS, ADSW will include the second EcoWaste and the seventh Zayed Future Energy Prize Award Ceremony; it also coincides with the Fifth General Assembly of the International Renewable Energy Agency.-TradeArabia News Service