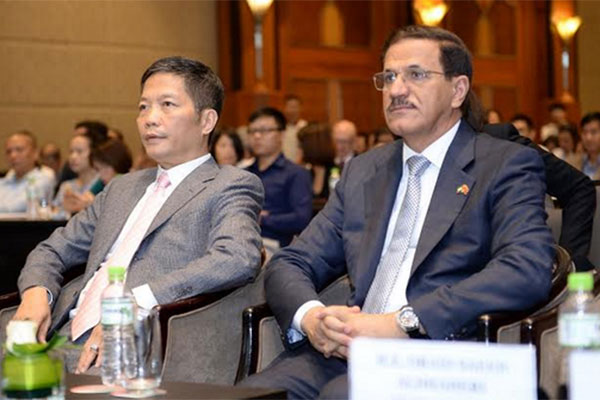 The event was inaugurated in the presence of Sultan bin Saeed Al Mansoori, UAE Minister of Economy; and Tran Tuan Anh, Minister of Trade and Industry of Vietnam, and with the participation of more than 150 officials, businessmen and investors from both countries.

Mansoori said in his speech that the UAE and the Socialist Republic of Vietnam enjoy strong and prosperous bilateral relations. He pointed out that the UAE is the topmost trading partner of Vietnam in the Mena region and serves as an excellent gateway for the trade of Vietnamese goods and products with the region.

The country is also an attractive destination for Vietnamese companies looking to expand trade and investment in the region’s markets, he added.

Meanwhile, Vietnam accounted for 39 per cent of the total value of non-oil trade between the UAE and ASEAN countries in 2017, and it is the largest trading partner of the country from the ASEAN region.

He added that the UAE’s investment companies are keen to expand their presence in the Vietnamese markets. The UAE investments in Vietnam are currently concentrated in the sectors of logistics, ports, maritime operations, aviation, tourism and hospitality, in addition to oil and gas, he said, pointing out the importance of joint work to expand the umbrella of cooperation to include other sectors of mutual interest such as automotive, textile industries, agriculture and food security, infrastructure, renewable energy, R&D, smart cities and technology.

Tran Tuan Anh, Minister of Industry and Trade of Vietnam, hailed his country's relations with the UAE, emphasizing that it is witnessing a continuous development reflecting the resolve of both parties at the governmental and corporate levels to move towards a broader partnership. He further reaffirmed his country's desire to develop cooperation efforts with the UAE in various fields.

Obaid Saeed Al Dhaheri, UAE Ambassador to Vietnam, said in his welcoming speech that the scope of bilateral and economic cooperation between the UAE and Vietnam are growing, and the two sides are witnessing an increase in the exchange of visits by officials and trade delegations.

The forum witnessed the signing of a memorandum of understanding (MoU) between Customs World - Dubai and Vietnam Logistics Business Association to enhance trade exchange and to facilitate the movement of goods and commodities between and through the two countries to various regional markets, by facilitating procedures, reducing costs and opening up new markets for companies and businesses in both countries. – TradeArabia News Service