Aquaventure After Dark to host party on August 27 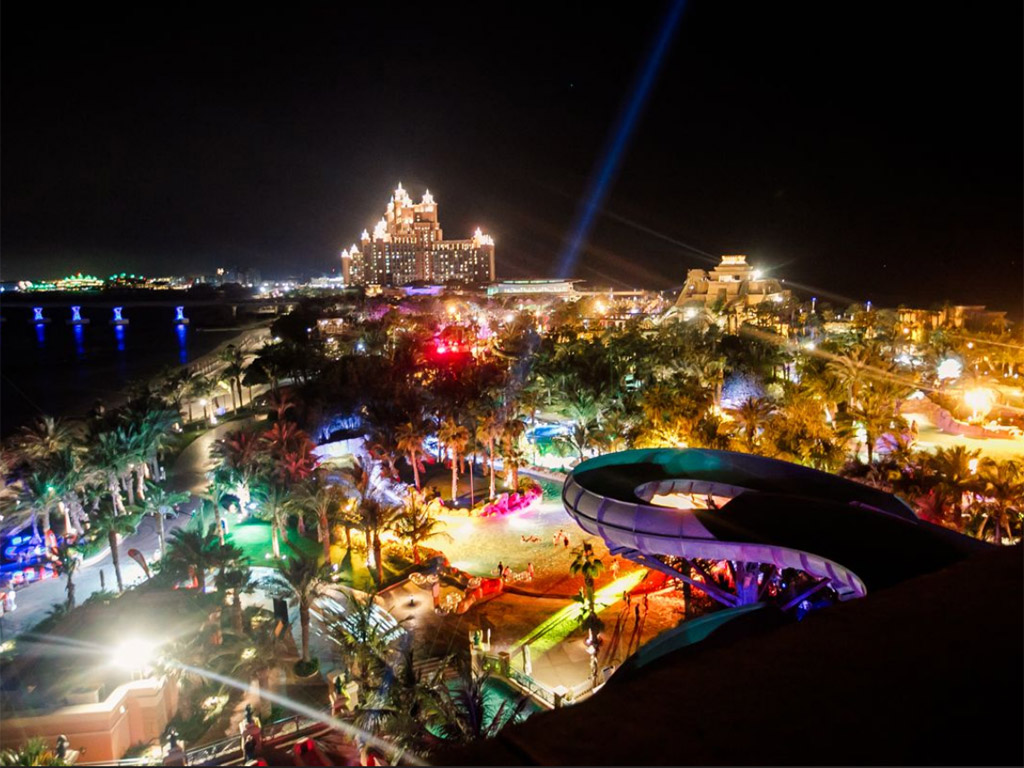 Aquaventure After Dark, the UAE’s biggest moonlit waterpark party, is after three years returning to close the summer season with a festival-style party on August 27 from 7pm till midnight.

Waterpark fans over the age of 16 can look forward to three towers’ worth of action-packed fun with up to 105 rides, slides, and attractions to choose from, three live DJ zones playing the Summer’s top tunes, on the ground activations sponsored by Coca Cola, an array of tasty food options, and a Virgin Radio zone. Limited early bird tickets are now on sale for AED199 ($54.1).

At the first Aquaventure After Dark event since Aquaventure Waterpark became the largest in the world (with the addition of Trident Tower in February 2021) ticket holders can enjoy a waterpark full of record-breaking experiences once the sun goes down.

Featuring a total of 28 new record-breaking waterslides and attractions including the world’s tallest waterslide of its kind, the tallest vertical drop body slide in the Middle East and the region’s first cliff jumping experience – Aquaventure After Dark will set adrenaline levels soaring. In addition, everyone’s famous favourites such as the Leap of Faith, Slitherine and Poseidon’s Revenge will be lit up with lasers, fire blasters and more to tempt waterpark revellers.

With good vibes only, next-level entertainment will include top DJs from around the globe – Parisian DJ Keza, regularly in residence at Dubai’s most prestigious clubs, Egypt’s DJ Kaboo whose Arab ‘trap’ tracks feature in Marvel’s Moon Knight series, and Dubai’s famed turntable revolver DJ ‘Mr Shef Codes’ – all spinning beats to provide the soundtrack to an unforgettable night. With a completely different music vibe at all three towers, partygoers will feel like they’re at a festival – sliding and dancing through each zone while laser shows dazzle them all night long.

Two exciting brand partners will join Aquaventure After Dark to bring a little extra magic to the evening. Coca-Cola has designed multiple daredevil games with thousands of dirhams up for grabs for the lucky winners. The ‘Dunk Tank’ is a game where the person sitting on the chair falls into the dunk tank of Coca-Cola if the ball hits the target, while ‘Wipe Out’ tests up to four players’ stamina and agility provoking reactions as a sweeping mechanical arm attempts to knock them off their feet, and ‘Mechanical Surf’ offers an exciting and challenging ride as participants try not to fall off.

Atlantis Aquaventure’s official radio partner, Virgin Radio Dubai 104.4, will also join the party, with an exciting, exclusive competition being announced on their social media channels on 15th August, culminating on the night. Virgin Radio is also hosting a chill zone to provide wind-down time for guests needing a rest after the thrill of a lifetime.

In true festival fashion, foodies at Aquaventure After Dark can indulge in delicious food options from all over the world throughout the evening. Guests can opt for Snappers’ tasty selection of American-style diner fare including loaded fries, buffalo popcorn chicken, beef hotdogs, flaming shrimp waffle cones plus vegan burgers, while Barracudas will also offer indoor seating and something for everyone’s tastebuds including Arabic mezze, freshly baked pizzas, shawarma, falafel, dosas and Chinese noodles, so partygoers can rest assured they will have plenty of sustenance to fuel their evening’s fun.

Guests for Aquaventure After Dark must be a minimum of 16 years old to enter and IDs will be verified. To avoid missing out and secure the best prices, guests can purchase an early bird ticket for only AED199 by heading straight to the online booking link. Advance purchase tickets will be AED249 thereafter, while limited regular tickets at the gate are available at AED299.

Day visitors to the waterpark or guests staying in-resort at Atlantis, The Palm can also upgrade their ticket on the day for just AED100 at any Guest Services Kiosk in Aquaventure Waterpark. – TradeArabia News Service