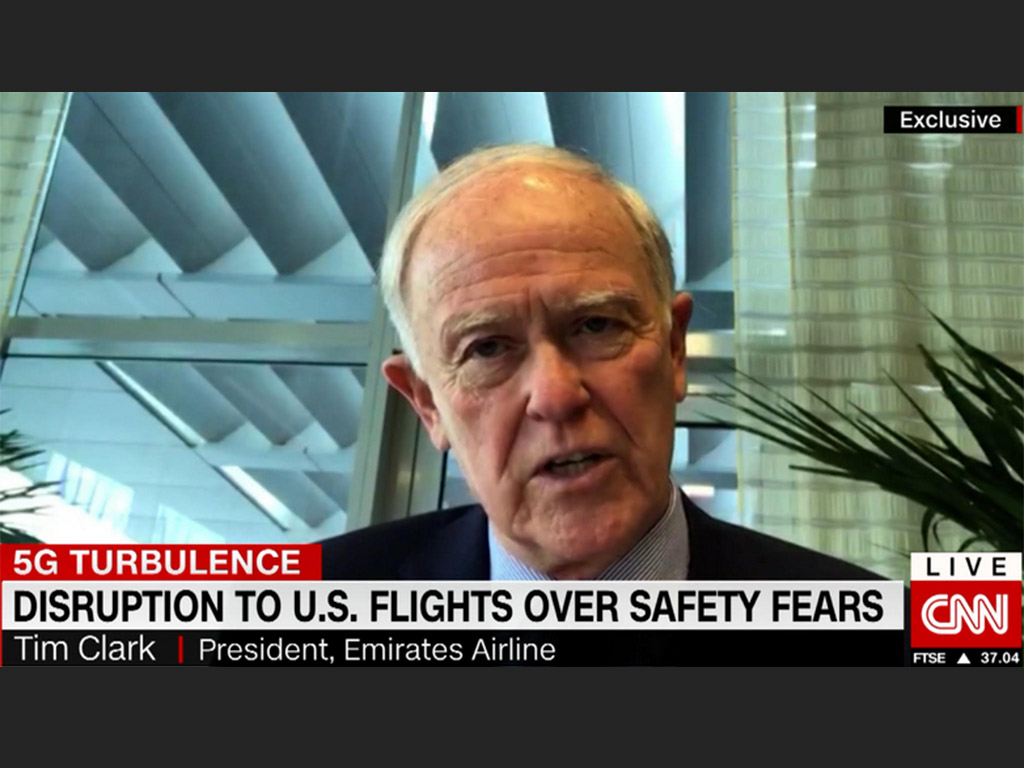 Emirates President Tim Clark said the airline was not aware of some of the potential 5G rollout issues until Tuesday morning, calling the situation "one of the most delinquent, utterly irresponsible" he has seen in his aviation career.

Major international airlines are scrambling to modify or cancel flights to the US amid uncertainty about potential interference between new 5G cell phone services and critical airplane technologies. Emirates cancelled flights to nine US destinations on Wednesday.

In an exclusive interview on CNN’s “Quest Means Business” with Richard Quest, Clark said: "I need to be as candid as I normally am, and say this is one of the most delinquent, utterly irresponsible issue subjects, call it what you like, I've seen in my aviation career because it involves organs of government, manufacturers, science, etc.

“And you know, the notion that, for instance, the United States government should sell its franchise for all the frequencies for a large amount of money. Somebody should have told them at the time - that the risks and the dangers they placed in certain frequency uses around field, airfields, metropolitan fields that should have been done at the time."

The Emirates president added that they were not aware of the issues until Tuesday morning "to the extent that it was going to compromise the safety of operation of our aircraft and just about every other 777 operator to and from the United States and within the United States."

Transportation regulators had already been concerned that the version of 5G that was scheduled to be switched on could interfere with some airplane instruments, and many aviation industry groups shared those fears — despite reassurances from federal telecom regulators and wireless carriers.

"We were aware of a 5G issue. Okay. We are aware that everybody is trying to get 5G rolled out after all it's the super cool future of whatever it may be communication and information flow. We were not aware that the power of the antennas in the United States have been doubled compared to what's going on elsewhere,” Clark said.

“We were not aware that the antenna themselves have been put into a vertical position rather than a slight slanting position, which then taken together compromise not only the radio altimeter systems but the flight control systems on the fly by wire aircraft. So on that basis we took that decision late last night to suspend all our services until we had clarity," he added, telling Quest the airline wouldn't take any risks. – TradeArabia News Service