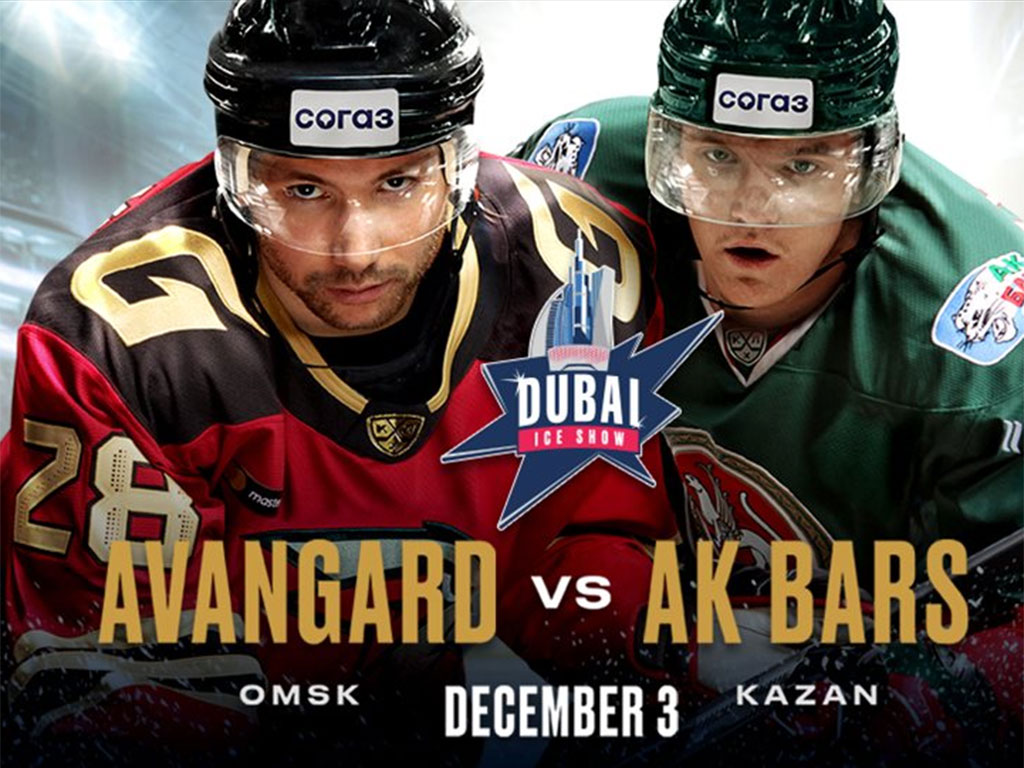 Coca-Cola Arena, Dubai’s home of live entertainment, said that tickets are now on sale for the Dubai Ice Show, running from December 3 to 5, and marking the first time that the multipurpose arena will be transforming into an ice rink.

On December 3, the KHL regular season game between the most recent Gagarin Cup winner Avangard Omsk and Ak Bars Kazan will be played within the framework of the KHL World Games. The game is timed to coincide with the official Day of Russia at Expo 2020 and will be held at the prestigious Coca-Cola Arena.

According to a memorandum of understanding signed between the Kontinental Hockey League, “Avangard” hockey club, Dubai Department of Tourism and Commerce Marketing, and Dubai Sports Council, the parties agreed to make concerted efforts to develop hockey and promote the image of the KHL in the UAE; and holding the Dubai Ice Show will be the first step towards achieving this strategic goal.

Mark Kar, General Manager of Coca-Cola Arena said: “We are delighted to be welcoming another first for the Coca-Cola Arena, allowing us to truly showcase the multipurpose facilities the venue offers. We look forward to working with KHL World Games, Dubai Sports Council, Dubai Tourism and Avangard as well as seeing both residents and tourists enjoying what promises to be another outstanding and unique experience at the Coca-Cola Arena.”

Alexey Morozov, KHL President, said: “We are excited about the KHL World Games project being resumed after almost two years! The UAE will become the 15th country to host a KHL game, and we are very pleased that the most recent Gagarin Cup winner Avangard Omsk and the only three-time champion of our League Ak Bars will go to Dubai.”

“The match-up of these two teams during the latest playoffs resulted in one of the best series in the entire KHL history. The upcoming game is bound to be hard fought and spectacular. We appreciate the cooperation with Dubai Department of Tourism and Commerce Marketing, Dubai Sports Council, and Avangard hockey club enabling the game to be played in such a remarkable location.

“The UAE is a promising market for the development of hockey, and we will make every effort possible to ensure that getting acquainted with the KHL and our game will become an outstanding and memorable event for Dubai,” Morozov added.

Alexander Krylov, Avangard HC Board of Directors Chairman, said: “Having received an offer from the League to hold a game in the UAE, “Avangard” was pleased to support this initiative. Significantly, the event will take place on the Day of Russia in Dubai, it is an honour and a big responsibility for us. We are current champions not only on ice, but off ice as well - in marketing, interacting with mass media, social media, so I have no doubt that our expertise and experience will help us to organize Dubai Ice Show perfectly well. It is a great new challenge for our club.

“The Arena that has not hosted any hockey games needs to be prepared for an official KHL game in a short span of time. We need to work out many details. I am confident that we will succeed in holding an event that will be a source of pride not only for the KHL, but for the country in general. In the near future, the start of ticketing for Dubai Ice Show will be announced. We are planning to hold a number of bright and memorable events, including Tatiana Navka’s “Sleeping Beauty” ice show, so that people in Dubai get a chance to explore Russian hockey and ice sports. We are looking forward to see you in Dubai in early December!”

Saeed Hareb, Secretary General of Dubai Sports Council said: “We are really excited about Dubai Ice Show as we sign this MOU alongside Dubai’s Department of Tourism and Commerce Marketing, with our partners from Russia, Kontinental Hockey League and Avangard Hockey Club.”

“The event is planned for early December, between December 3-5. December 4 will be the official Day of Russia at Expo 2020. It is going to be a perfect opportunity for families to spend some great days together. There are many activities planned, including a spectacular theatrical “Sleeping Beauty” show on ice featuring world-famous stars of figure skating from Russia, and an ice-hockey match between two top teams from Russia.

“We at Dubai Sports Council are always excited about bringing new events to Dubai for different members of our diverse community. Ice Hockey is one of the most popular sports in the world with millions of fans around the globe, including many in Dubai, and we are looking forward to three days of great action and entertainment on ice this December,” Hareb added. – TradeArabia News Service