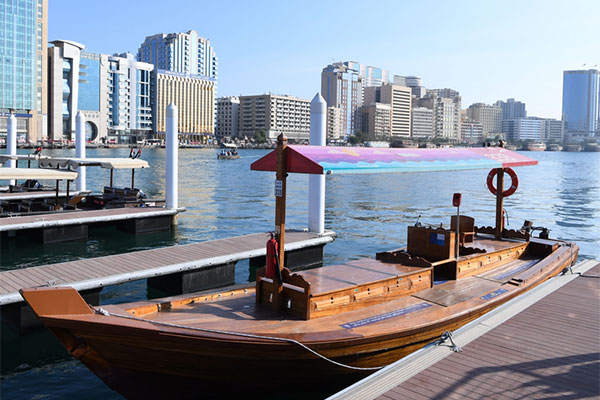 Dubai’s Roads and Transport Authority has kickstarted the formal operation of the new enhanced generation of traditional wooden abras that boast of a design conforming to the highest security, safety and environmental standards.

The debut of these new abras, which retain the traditional shape of abras, is part of RTA’s strategic plan to upgrade marine transport services to fit the needs of people.

“The design of the new enhanced generation of traditional wooden abras caters to a string of security, safety and environmental standards such as the relocation of the driver’s position to have a better view compared with the low-level location in the normal abras,” said Mohammed Abu Baker Al Hashemi, Director of Marine Transport, Public Transport Agency, RTA.

“The new abras conform to the stipulations of the Dubai Universal Design Code for People of Determination featured by two slots for wheelchairs, and places for life jackets. Moreover, the new abras are fitted with smart transportation systems, GPS, cameras and nol payment systems. The new enhanced generation of traditional wooden abras have engines linked with the remote monitoring system, and advanced onboard sound and lighting systems.

“The aim of introducing these new enhanced generation of traditional wooden abras is to improve the mobility between different parts on Dubai Creek, and increase the exposure to fascinating marines views while maintaining the traditional and historic nature of this type of transit means.

“The fare of abra service on Al Fahidi – Old Deira Souq is two dirhams per person from Saturday to Thursday from 08:00 am to 10:45 pm. On Friday, the timing is from 10:00 am to 11:45 pm. Manufactured of African teak wood, the new abra measures 35 feet in length and 10.5 feet in width. The abra, which can accommodate 20 passengers, is powered by a 78hp diesel engine compared to the 30hp diesel engine of the old abras,” added Al Hashemi.

“Operating the new enhanced generation of traditional wooden abras is part of a master plan developed by RTA to overhaul Dubai’s marine transport systems which serve about 14 million riders per annum. RTA plans to increase the number of marine transport stations to 59 stations by 2025 and manufacture 26 marine transport modes. It also plans to open new lines on Dubai Creek and the coastal strip along the Jumeirah beaches as well as new lines to serve the islands and the Dubai Water Canal,” concluded Al Hashemi. – TradeArabia News Service