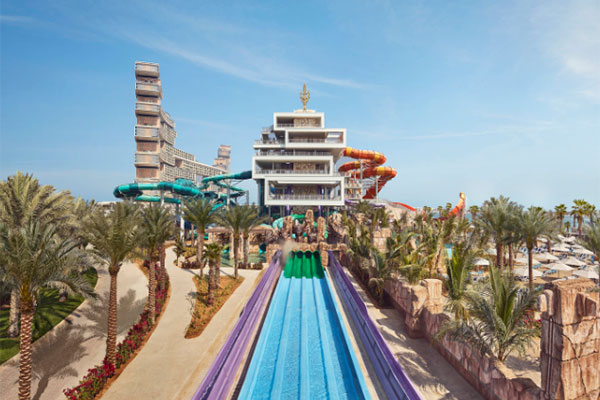 Increasing the size of Atlantis Aquaventure by a third, and featuring a total of 28 new record-breaking waterslides and attractions (12 in Trident Tower and 16 in Splashers), hero experiences include the world’s tallest waterslide of its kind, the longest family water coaster in the world of its kind, the tallest vertical drop body slide in the Middle East and the region’s first cliff jumping experience.

At 48-metres tall, Trident Tower – the biggest in Aquaventure – boasts 12 record-breaking waterslides and attractions. Splasher’s Lagoon and Splashers’ Cove, meanwhile, feature 16 sensational waterslides and attractions. Designed for endless hours of water-based fun, together they form the biggest kid’s only waterpark experience in the Middle East.

Tim Kelly, Executive Vice President and Managing Director, Atlantis Dubai, said: “As the biggest waterpark expansion in history, we are delighted that Atlantis, Dubai is now home to one of the world’s largest waterparks, as well as record-breaking waterslides some of which cannot be found anywhere else globally.”

“Now with 105 slides, attractions and experiences for all ages and thrill levels, the expansion has increased Atlantis Aquaventure by a third in size to feature 79 rides across three towers, 26 marine and watersport experiences and 26 food and beverage outlets and kiosks across the park. We’ve also doubled the length of Aquaventure beach to 1km.