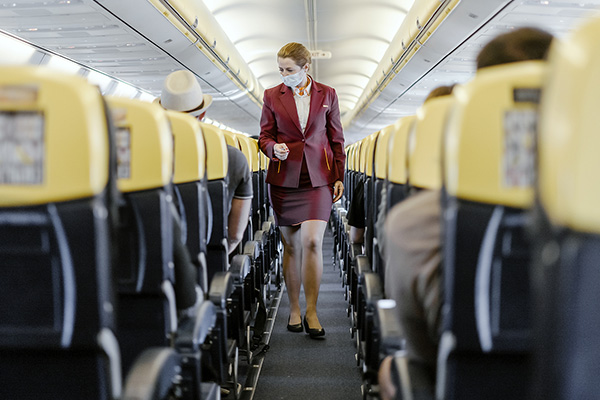 Middle Eastern airlines witnessed a 92.3% fall in passenger demand for August, compared with a 93.3% decline in July, said the International Air Transport Association (IATA) in its International Passenger Markets report.

African airlines’ traffic sank 90.1% in August, slightly improved over a 94.6% decline in July. Capacity contracted 78.4%, and load factor fell 41.0 percentage points to 34.6%, which was the lowest among regions.

Asia-Pacific airlines’ August traffic sank 95.9% compared to the year-ago period, barely budged from a 96.2% drop in July, and the steepest contraction among regions. Capacity dived 90.4% and load factor shrank 48.0 percentage points to 34.8%.

European carriers’ August demand plunged 79.9% compared to last year, improved from an 87.0% drop in July, as travel restrictions were lifted in the Schengen Area. However, more recent flight data suggests this trend has reversed amid a return to lockdown and quarantine in some markets. Capacity fell 68.7% and load factor dropped by 32.1 percentage points to 57.1%, which was the highest among regions.

Latin American airlines had a 93.4% demand drop in August compared to the same month last year, versus a 94.9% drop in July. Capacity crumbled 90.1% and load factor dropped 27.8 percentage points to 56.1%, second highest among the regions.

The global domestic traffic fell 50.9% in August. This was a mild improvement compared to a 56.9% decline in July. Domestic capacity fell 34.5% and load factor dropped 21.5 percentage points to 64.2%.

“Traditionally, cash generated during the busy summer season in the Northern Hemisphere provides airlines with a cushion during the lean autumn and winter seasons. This year, airlines have no such protection. Absent additional government relief measures and a reopening of borders, hundreds of thousands of airline jobs will disappear. But it is not just airlines and airline jobs at risk,” said Alexandre de Juniac, IATA’s Director General and CEO.

“Globally tens of millions of jobs depend on aviation. If borders don’t reopen the livelihoods of these people will be at grave risk. We need an internationally agreed regime of pre-departure COVID-19 testing to give governments the confidence to reopen borders, and passengers the confidence to travel by air again,” he added. – TradeArabia News Service