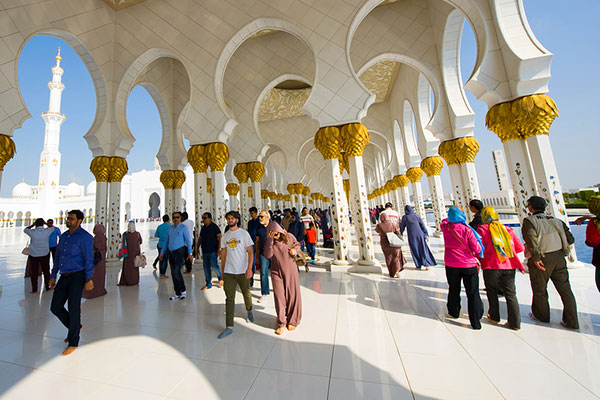 The number of international visitors coming to the UAE capital in 2019 is estimated to have reached 11.35 million, according to figures collated by the Department of Culture and Tourism – Abu Dhabi (DCT Abu Dhabi).

The final figures include official international hotel guests, plus estimates for overnight visitors from overseas staying with friends or relatives and an estimate for the number of same-day international visitors.

The hotel guest numbers represented an increase of 2.1 per cent over the previous year, whilst hotel occupancy was up 1.6 per cent (to a rate of 73 per cent), average length of stay (ALOS) for 2019 was up 1.8 per cent (to 2.6 nights) and total revenues were up an impressive 6.6 per cent (to Dh5.8 billion/$1.5 billion). ARR metrics were up 4.7 per cent and RevPAR also increased across the year by 6.4 per cent.

India, China, the UK and the US remained the top four non-UAE source markets for hotel guests, with Russia, Ukraine, South Korea and Bahrain the fastest growing markets between 2017 and 2019. The Indian market performed especially well, with an 8.2 per cent increase over 2018 – with more than 450,000 hotel guests arriving - and the US posting a 5.1 per cent increase over the same time period.

On Saadiyat Island, hotel guest numbers for 2019 saw an incredible 73.6 per cent increase, with 165,436 total visitors for the year. Revenues jumped by an impressive 50.3 per cent whilst occupancy went up by 14.7 per cent. Average length of stay for Saadiyat increased by 2.5 per cent, to 4.2 nights whilst RevPAR went up by 5.7 per cent.

Hotels in the ADNEC area posted an impressive increase in revenue of 22.7 per cent for 2019, whilst guest numbers increased by 9.4 per cent, with a total of 305,257 guests arriving. Occupancy went up by 9.9 per cent whilst average length of stay increased by 1.6 per cent. ARR went up by 10.4 per cent and RevPAR increased by 21.3 per cent.

“These 2019 results reflect the hard work and dedication that DCT Abu Dhabi, its tourism stakeholders and its partners have put into offering a ‘must-see, must-visit’ leisure and business destination to not only the international visitor but to domestic guests also,” said Saood Al Hosani, acting undersecretary at DCT Abu Dhabi. “These outstanding results were underpinned by some world-class, exceptional events presented in the UAE capital across 2019, including the inaugural Abu Dhabi Showdown Week – which included the massively popular UFC 242 event – Abu Dhabi Family Week – which included the Nickelodeon Kids' Choice Awards - and Summer In Abu Dhabi events as well as the Eid Al Adha celebrations. We also saw a fantastic edition of the Formula 1 Etihad Airways Abu Dhabi Grand Prix, Abu Dhabi Art, ADIPEC 2019 and concerts from global superstars such as Eminem, Bruno Mars and the Red Hot Chili Peppers."

“These events helped elevate Abu Dhabi’s global standing and reputation and contributed massively to our guest metrics, resulting once more in a record breaking year in terms of visitation to the UAE capital,” he said. - TradeArabia News Service