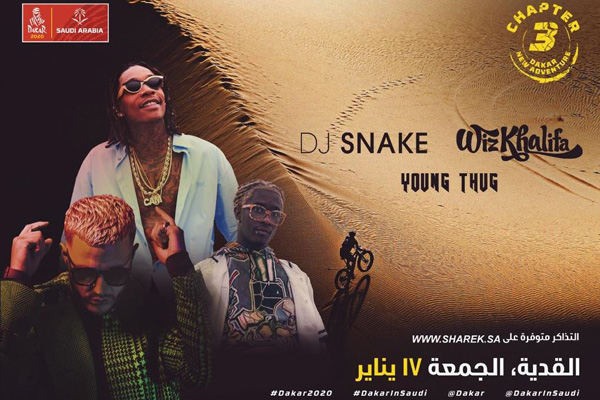 Following two weeks of unmissable action during the world’s toughest endurance race, Dakar Saudi Arabia 2020 fans will be treated to an exceptional closing performance, taking the excitement off the track and onto the stage with the introduction of three headline acts to round off 13 days of high octane action.

Hip-hop superstar Wiz Khalifa, Grammy Award-winning rapper Young Thug and renowned DJ and producer DJ Snake will take to the stage on January 17 as they prepare to bring the curtain down on Dakar Saudi Arabia 2020’s epic grand finale.

To signal the conclusion of the unparalleled adventure, American music sensation, songwriter and actor Wiz Khalifa will be making his debut in Saudi Arabia to perform some of his biggest hits including “Black and Yellow”, “We Dem Boys” and “See You Again”, which reigned at number one on the Billboard Hot 100 for 12 non-consecutive weeks. During his career, he has performed with some of the biggest names in the music industry, including Snoop Dog, 50 Cent, Wu – Tang Clan and Fallout Boy.

Grammy Award - winning rapper Young Thug, best known for his eccentric vocal style and fashion sense will take the crowds on a journey of his scintillating melodies with songs including “Best Friend”, “Hot” and “This is America”. Young Thug rose to fame after featuring on the 2017 hit song "Havana" by pop singer Camila Cabello, which reached number one on the Billboard Hot 100 in January 2018, becoming his first number one single.

Joining the hip-hop duo, French DJ and record producer DJ Snake will bring a catalogue of his infectious hits to the Kingdom including “Magenta Riddim”, “Get Low” and famed collaboration ft. Selena Gomez, “Taki Taki”, promising to keep the crowds in rhythm all night.

The final day, stage 12 of the world’s most challenging race, will see the rally pilots cross the rough terrain, from Haradh towards Qiddiya, with the last 100km pushing navigators to their limits as they conclude their 7,500km journey. Qiddiya will host a special final stage race – the Qiddiya Grand Prix – as part of the last day of Dakar Saudi Arabia 2020. The kingdom’s future capital of entertainment, sports and arts will be the venue for a final 20km battle for the drivers who manage to finish the main rally. Five trophies, one for each category of Dakar Rally, will be awarded to the drivers who complete the race around Qiddiya site in the best time. The podium ceremony for Dakar Saudi Arabia 2020 and Qiddiya Grand Prix will be held in front of Qiddiya’s iconic cliff.

Guests can join the celebrations by visiting Dakar Village with action-packed, all-day activities for entertainment lovers to enjoy. The Village will offer freestyle motocross shows that will be performed throughout the day as well as a stunt show presented by Red Bull. Children and family will be in the heart of activations, with games, obstacle courses and virtual circuit competitions all contributing to the fun and engaging atmosphere.

Dakar Village will be open on January 17 from 12pm to 1.30am; General Access tickets to the Dakar Rally closing concert start from SAR150 ($39.9). - TradeArabia News Service