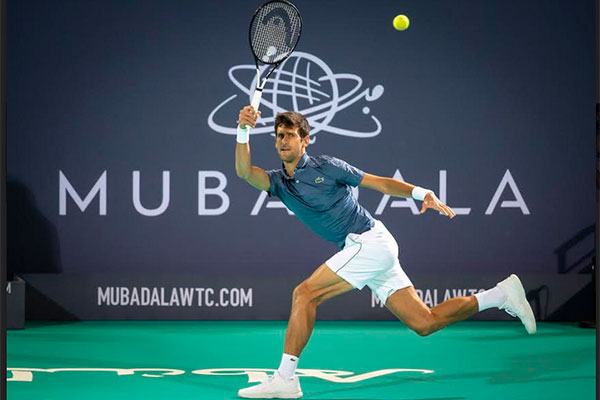 The upcoming Mubadala World Tennis Championship (MWTC) said that the 2018 MWTC champion and the World No.2 men’s tennis player, Novak Djokovic will be part of the line-up for the 2019 edition.

The championship runs from December 19-21 at the International Tennis Centre at Zayed Sports City in Abu Dhabi.

“Novak’s confirmation is proof of the fact that the Mubadala World Tennis Championship has developed into a premier tournament, attracting the cream of tennis talent from across the world. Novak is no stranger to Abu Dhabi, having won the title four times and I am confident that he will come into the tournament firing on all cylinders,” said John Lickrish, CEO of event organisers Flash Entertainment.

“Innovation and a constant uptick in the value we aim to provide to spectators has been a hallmark of the Mubadala World Tennis Championship. This year, the change in dates, a line-up brimming with class, and the transformation of the International Tennis Centre into a wholesome entertainment village, are part of our efforts to make the tournament a certainty in the calendars of UAE residents and visitors,” added Lickrish.

“Abu Dhabi is a special place and one where I have tasted success consistently. The courts are great, the spectators know their sport, and the atmosphere is thoroughly enjoyable,” said Djokovic.

“The line-up for the tournament is really strong. You always want to play challenging opponents early in the season in order to get a good measure of yourself and I am hoping I can put in place a few things that I have been working on in the off-season,” he said.

Aside from the best live tennis action on court, ticketholders can make the most of excellent food and beverage offerings in the interactive Tennis Village, tennis clinics, question and answer sessions with the players and competitions. Demonstrating the championship’s appeal as a fun family day out, Day One is also Kids’ Day, with children 12 and under going free. – TradeArabia News Service