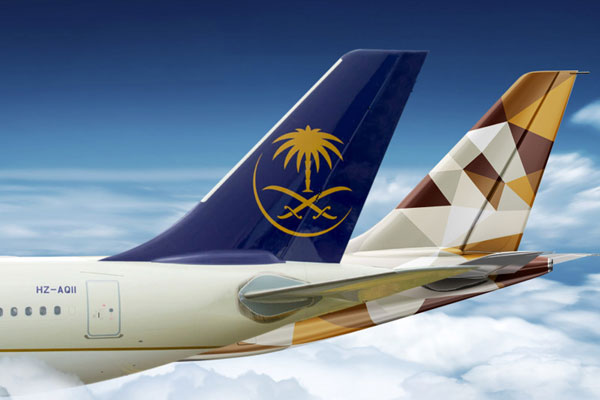 UAE's national airline Etihad Airways and Saudia, the kingdom's flag carrier have marked the first anniversary of their commercial partnership by announcing 12 new codeshare routes to key destinations in Asia and Europe.

Since signing their agreement in October last year, the two airlines have placed their flight codes on each other’s services between Abu Dhabi and the Saudi Arabian cities of Dammam, Jeddah, Riyadh and Medina, said Etihad in its press release.

Commenting on their partnership, Etihad Aviation Group CEO Tony Douglas, said: "The UAE and Saudi Arabia enjoy strong economic, diplomatic and cultural links, and the partnership between our two national carriers is a natural and productive extension of these ties."

"Since announcing our partnership at this time last year, we have jointly achieved more than 53,500 passenger journeys, five times the 11,390 for the whole of 2018," he noted.

"The increased collaboration we have announced today will deliver even more growth to both airlines, provide greater choice for our passengers and freight customers, and further strengthen the ties between our nations," he added.

Saudia Director-General Saleh bin Nasser Al Jasser said: "Network growth and increased access to destinations provides our guests with greater flexibility and convenience. We are pleased to further enhance our collaboration with Etihad Airways and continue to support the growth in services and routes."