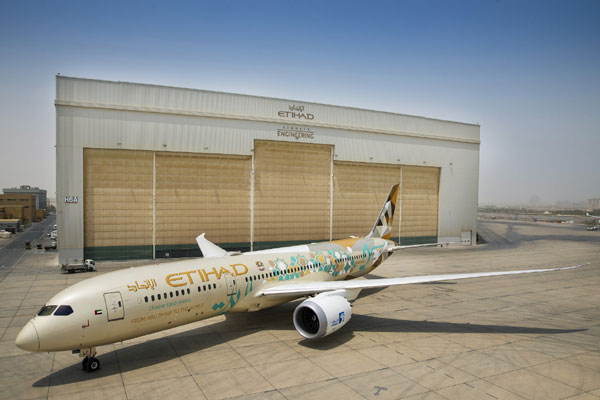 Etihad Airways has teamed up with  Abu Dhabi National Oil Company (Adnoc) to launch a series of aircraft liveries for Saudi National Day.

This joint initiative celebrates ADNOC’s and Etihad’s robust international trade relationships and the rich diplomatic and cultural ties that the UAE has forged with nations around the world.

The first livery is a special Saudi Arabian-inspired Boeing Dreamliner 787-9 on EY317 and EY318 between Abu Dhabi and Riyadh.

Ahmed Al Qubaisi, senior vice president Government, International and Communications, Etihad Aviation Group, said: “The UAE has experienced unprecedented growth and development in the last 50 years and is now a global leader in aviation. Etihad, its pioneering national airline, together with major Abu Dhabi partners such as ADNOC, represent the best of what Abu Dhabi has to offer to the world. As forces for positive growth and development in the markets we serve, we share a responsibility to ensure that these relationships are nurtured for the benefit of everyone. This striking livery represents this pledge.”

The bespoke livery celebrates the UAE’s close historical ties with Saudi Arabia, through an Islamic calligraphic and Mashrabiya latticework design in the kingdom’s national colours.

As the airline of choice to many Saudi nationals, to mark the occasion, the airline will additionally be hosting an exciting programme of events to pay special appreciation to the kingdom and Etihad guests.

On the 89th Saudi National Day, the celebration will kick off with a special video which will be broadcast with players from Riyadh-based Al Nassr FC, one of Saudi Arabia’s most popular football teams which Etihad sponsor. Saudi pilots working at the airline will also feature in their own video.

Guests travelling from Abu Dhabi International Airport will enjoy themed check-in counters and giveaways, and those visiting Etihad’s First and Business Class Lounges in the UAE’s capital will be treated to a selection of Saudi Arabian themed cuisine. On flights between Abu Dhabi and Saudi Arabia on National Day, guests will receive Kabsa (a traditional Saudi Arabian dish) or Shawarma, themed chocolates, and greeting cards.

The airline will also be offering special fares from Saudi Arabia during the National Day celebration period. More details will be available on etihad.com or through local travel agents.

Earlier this year, Etihad and Saudi Arabian Airlines (Saudia), the Saudi national flag carrier, announced positive growth in traffic since their codeshare partnership began in November 2018. The ongoing and expanding partnership between the two airlines continues to deepen the ties that exist between the Kingdom of Saudi Arabia and the United Arab Emirates.

During the last 10 days of Ramadan, Etihad further demonstrated its commitment to the kingdom by operating seasonal flights between Al Ain in the UAE and Jeddah.

In 2018, Etihad operated 8,049 passenger flights and carried 1.3 million guests between Saudi Arabia and the UAE.