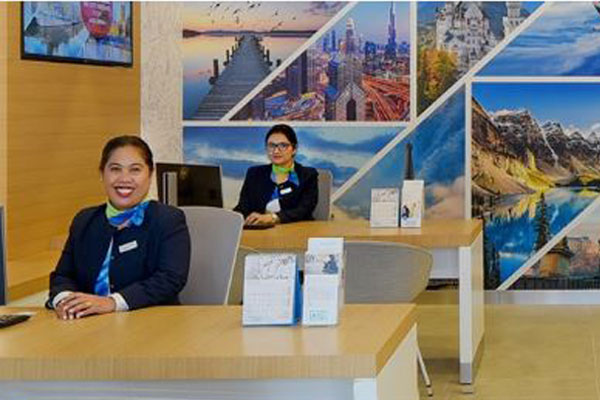 Travel from the UAE to the island of Ireland has seen strong growth from January to June, based on travel statistics released by dnata Travel, the UAE’s longest-standing travel agency, which is celebrating its 60th anniversary this year.

Compared to the same period (H1) in 2018, UAE locals and residents have been visiting Ireland in greater numbers, drawn to its diverse landscape full of lush greenery and vast natural beauty. Over the first two quarters of the year, 58 per cent more bookings to Ireland were made through dnata Travel’s platforms, and room nights booked have also increased by 72 per cent.

Additional data indicates that sales of trips and accommodation to Ireland increased nearly two-fold during Eid Al Fitr alone, as compared to last year. This correlated to the travel provider noting that online searches for holidays to Ireland have seen a 675 per cent augmentation in the first six months of this year. The most preferred destination for travellers from the UAE market was to Dublin, with 95 per cent of hotel bookings made through the dnata Travel platform favouring the capital city, followed by the cosmopolitan city of Cork.
Visitors from the region have been found to reinforce their preference for luxury accommodation whilst abroad, as 47 per cent of hotels booked were for five-star properties, followed by four-star and three-star hotels respectively.

Antonio Fellino, vice president of Retail and eCommerce for dnata Travel UAE, commented: “Trips to Ireland with dnata Travel offer UAE travellers unique opportunities including the chance to stay in a grand castle, or a small cottage at the heart of a colourful local village, or to explore rugged, scenic landscapes that follow in the footsteps of their favourite Game of Thrones characters. Earlier this year we brought a mini-Ireland to life in the dnata Travel store in The Dubai Mall equipped with its own castle and a wind dome full of prizes to be caught, and the response was fantastic.”

The ever-strengthening relationship between the two nations, highlighted by visa free entry now available to UAE nationals, is amongst the contributing factors towards the formidable spike in travel figures. The UAE’s support and celebration of Ireland’s National Day – with numerous UAE landmarks such as the Burj Khalifa lighting up in green – as well as dnata Travel’s unique heart-shaped wind dome in The Dubai Mall, further enforced visibility and awareness of Ireland as a top holiday destination.

Niall Gibbons, CEO of Tourism Ireland, commented: “The island of Ireland has much to offer to the residents of the UAE, be it adventure, scenic landscapes, or unique experiences, all of which contribute to the rise in visitor figures from this market year on year. Through increased exposure to residents of the UAE, we hope to welcome more guests to explore the island of Ireland and appreciate its rich culture, the friendliness of the people and varied attractions.”

Key travel hubs include the iconic cities of Dublin, Cork, Galway, Belfast and Derry/Londonderry across the Republic of Ireland and Northern Ireland. The island of Ireland has also made a name for itself through its up and coming attractions, including the draw of ‘glamping’ or luxury camping, and a number of festivals taking place throughout the year.