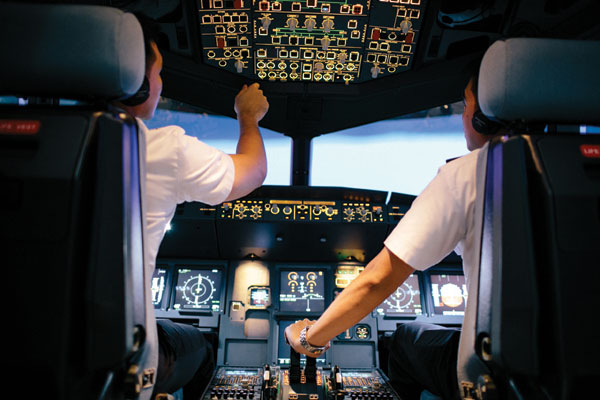 Alpha Aviation Academy UAE (AAA), the Middle East’s leading pilot training provider, is on a mission to become one of the world’s largest and most recognised providers of the Multi-Crew Pilot Licence (MPL).

Since receiving its first batch 10 years ago, AAA has trained over 600 cadets via the Multi-Crew Pilot Licence (MPL) course, with most graduates securing a position as a Second Officer.

"Over the course of the journey we have considerably upgraded our infrastructure, expanded our cadet training capacities, partnered with other leading international pilot training providers, broken down gender and diversity barriers, inspired many young men and women to take to the skies and become a provider of pilots to the Middle East’s leading low-cost carrier, Air Arabia, Captain Nadhem AlHamad, general manager, Alpha Aviation Academy UAE tells TradeArabia.

To establish and operate a world-class airline pilot organisation requires several critical components and comprehensive interaction with all key stakeholders. Critical components include having the right team in place, continuous development of its training syllabus, strong emphasis on its safety and quality standards and checks, an aim to achieve operational excellence and the latest training infrastructure.

"The pilot training industry has high barriers of entry, such as being regulatory led and being a capital-intensive business in terms of acquisition of training assets (and then utilising them) - especially when an organisation is focussed on training pilots specifically to become first officers for an airline partner," he highlighted.

One of the academy’s key focuses since its founding has been diversity. "To date, our cadets have come from 65 different countries, including from nations as small as the Comoro Islands. We want everyone, irrespective of where they come from, to feel at home here," says Captain AlHamad.

In a move to encourage current professionals to undertake pilot training, Alpha Aviation Academy has recently extended the upper age limit on cadets training for the MPL licence from 33 years of age to 35.

And with just 3 per cent of the world’s commercial pilots being female, equal focus has been placed on empowering women to become pilots. Currently, 20 female cadets are training with Alpha, with a further 28 having previously graduated.

"The number of female enrolments in the training programme at Alpha Aviation Academy doubled in the first six months of 2018 compared to the first half of 2017, and we are glad that we are making positive progress in this field," he said.

The academy recently received its 50th batch which comprises cadets aged between 17 and 28 years old, from 12 different countries.

"Since we have started operations, we have graduated over 360 graduates, all of who went on to fly with Air Arabia (and a number of who have already become airline captains)," said Captain AlHamad.

Cadets are taught via the Multi-Crew Pilot Licence primarily to fly on the Airbus A320. The MPL is a relatively new method of teaching, that is now increasingly being adopted and embraced by civil aviation authorities and airlines around the world.

The emphasis of the MPL programme is training the cadet to function as an integral member of an airline’s multi-crew operational environment. Compared to traditional methods, this develops a higher level of safety and human factors awareness, learned from aviation incidents and accidents over the years.

The course takes approximately 22 to 24 months to complete. During the application process, cadets undertake academic, aptitude, and psychometric evaluation before an interview and medical examination.

At the end of the course, the cadets will graduate as a Second Officer. From there, they work up at the airline to become First Officer and then Captain.
"Some Captains achieve Captain position by their mid-to-late twenties," Captain AlHamad revealed.

When asked about how Alpha Aviation Academy is armed to tackle the global pilot shortage problem, Captain AlHamad said: "The pilot shortage is growing: the industry predicts that by 2037, 635,000 more commercial pilots will be required, with 10 per cent of those required across the Middle East."

"Each year we receive 10,000 inquiries and 250 applicants, with around 80 places available. We are aware that by no means can we begin to solve this shortage ourselves!"

"However, we are always looking to the future – including opportunities to expand both our physical infrastructure and our cadet capacity. Furthermore, irrespective of whether a potential cadet comes to study specifically with us or not, we are doing all we can to encourage anyone within society who is considering becoming a pilot to do so," he said.

Alpha Aviation Academy ensures the quality of its courses in three main ways:

• By employing the best-trained staff and instructors, all of who are seasoned aviation professionals.

• By offering world-class facilities, which includes a range of aircraft simulators such as the Airbus A320 MFTD simulator and an $11 million Airbus A320 Level-D full flight simulator.