Etihad celebrates delivery of its 10th A380 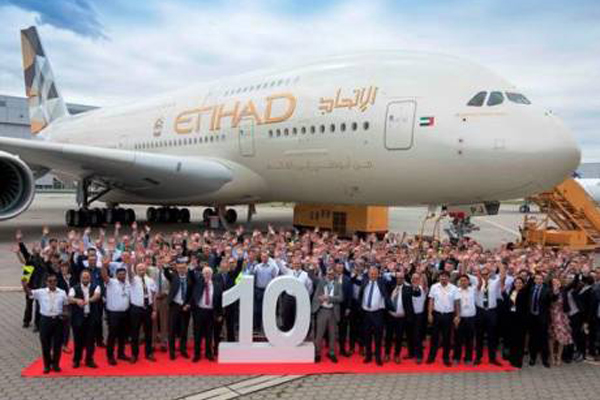 Etihad Airways marked a major milestone in its operations with the recent delivery of its 10th and final Airbus A380.

Employees from Etihad Airways and Airbus gathered at the European plane-maker’s Hamburg Finkenwerder plant in Germany, where the aircraft was officially handed over to the UAE national airline before commencing its delivery flight to Abu Dhabi.

The airline’s award-winning double-decker A380s are the most customised aircraft of their kind in commercial service and feature unique innovations such as The Residence - a three-room living space for up to two guests, including a living room, a private shower-room, and a bedroom. The aircraft also boasts nine First Apartments, 70 Business Studios, a Lobby Lounge, and 415 Economy Smart Seats.

Etihad Airways operates its fleet of Airbus A380s on flights from the UAE capital to London, Sydney, New York, and from July 1, Paris. - TradeArabia News Service