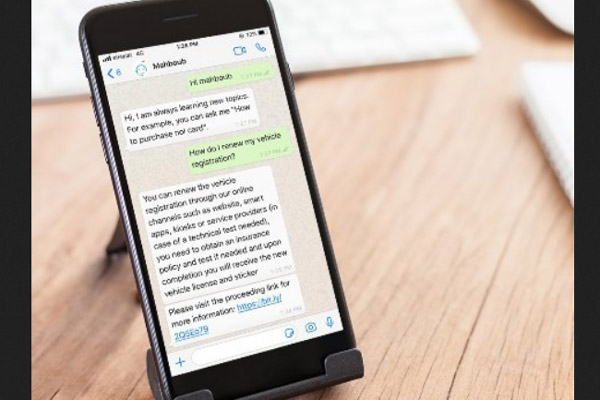 Dubai’s Roads and Transport Authority (RTA) has added a package of services to its Chatbot branded Mahboub, including the right-of-way inquiries, temporary road service requests, and the status of vendors' prequalification applications.

“The second service relates to the provision of a temporary road to land plots within the right-of-way in areas that have no asphalt roads. The third service is for inquiring about the status of prequalification of suppliers applications to inquire about the status of applications for prequalification of suppliers enabling them to be approved RTA suppliers.”

“The objective of providing these services is to offer them to the business community through RTA’s Chatbot (Mahboub) instead of the business app. The Chatbot is capable of serving customer needs related to RTA’s informational, procedural and interactive inquiries and thus reducing the pressure on the Call Centre. The Chatbot technology has a feature of learning from previous conversations, which helps to understand the nature of inquiries and respond to them accurately,” she concluded.

The Chatbot is bilingual (Arabic and English) and works on various platforms, thus serving a wide range of both language speakers inside and outside the UAE. Work is underway to expand the scope of the Chatbot to include various colloquial Arabic dialects, including the GCC dialect.

The Smart Services Department, in collaboration with several RTA departments, has introduced the most frequently used services (293 services) and added them to the system. Such services are highlighted by inquiries about the renewal of vehicle registration, introduction about nol and Abra services in addition to an array of transactional services that can be directly processed by users. It is worth mentioning that RTA’s Chatbot had been ranked as the biggest and best artificial intelligence-powered chatbot system in the region. – TradeArabia News Service