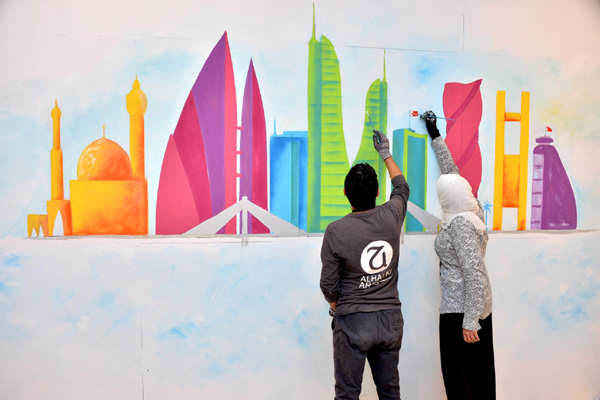 Dilmunia Mall Development Company recently hosted an exclusive event entitled “MODernart” where artists were invited to demonstrate their skills and talent by transforming shop hoardings into a work of art.

Commenting on the sidelines of the event, Shaikh Mohammed bin Duaij Al Khalifa, the chief executive officer (CEO) of Mall of Dilmunia, revealed: “At Dilmunia Mall Development Company, we look forward to building a partnership with the community and engaging with the Bahraini society. With MODern Art, we wanted to create an event of an entirely different calibre, as well as bring the Bahraini art community together in a way that’s never been done before in the kingdom.”

“We wanted to give the exceptionally talented local artists the room to express their creativity, using selected shop hoardings of Mall of Dilmunia as their blank canvas. They were given minimal direction, to encapsulate the azure sea blue of the Dilmunia logo, with free reign to create their own masterpieces. It was truly remarkable to witness their ideas come to life,” he added.

The event included a guided tour of Mall of Dilmunia, a VIP lounge area for business networking, and featured a live local musician as well as local artists that painted Modern Art murals during the ceremony in front of a captivated audience.

Rebecca C. Arnold, the Deputy CEO of Mall of Dilmunia, also commented on the sidelines of the event, saying: “With our MODernart event, we wanted to create a unique event that involved the community and encouraged creative conversation. We have a mission to engage the community year round and we will continue to host workshops, educational programs and events. It provided a platform for local artists to showcase their works, promote themselves as talented artists and also encourage the local community to take an interest in art themselves.”

The attendees were given the opportunity to network with business leaders and individuals from across the region, and the tour provided them with a sneak peak of what’s to come at Mall of Dilmunia. The event itself took an entirely different approach, and encapsulated the spirit of Modern Art with the multi-dimensional sounds provided by a local DJ and the live art murals created by local artists.”

Guests were provided a tour in various areas of the mall including the boulevard which provided visitors with the illusion of being outdoors within a vibrant European cityscape, as they walked underneath the largest LED screen ceiling in the GCC. The tour also included a view of The Bahrain Aquarium; once opened, the four-storey high cylindrical aquarium will mesmerize visitors from each level of the mall.

Mall of Dilmunia will transform the existing entertainment landscape in the kingdom with its flagship brand, Funscape World, which will provide a new standard of recreational activities with its various four zones – Funscape Adventure, Funscape Play, Funscape Ice and Funscape Sport.  Funscape Adventure and Funscape Play will include soft play areas for toddlers, and games for all ages such as bumper cars, VR games, an indoor rollercoaster, carnival games, video games, and sky high wall climbing areas, rope climbing, and zip-line facilities. For the first time in Bahrain, the Mall will encompass an indoor ice-skating rink - Funscape Ice – as well as Funscape Sport which will include two football pitches and Robo-Goalkeeper challenges, complete with all the necessary indoor sporting facilities, such as lockers and changing rooms. The Ice Rink will encourage ice-skating as a pastime and sport, where lessons will be offered by professional instructors to beginners, and tournaments and various other events will be hosted throughout the year. As for Funscape Sport, the pitches will also be available to rent and a Football Training Academy will be providing training during scheduled sessions during weekdays.

In addition to the family entertainment experiences, the Mall will boast an array of design elements including stunning views, as well as vibrant outdoor landscape, water canal and dancing fountains. The Mall will also provide an incredible outdoor experience, with luxurious rooftop facilities which will offer a myriad of food outlets and cafes, complete with breathtaking views of Muharraq city and beyond. In addition, the Mall will boast the largest atrium in Bahrain that can be utilized as an event venue. - TradeArabia News Service