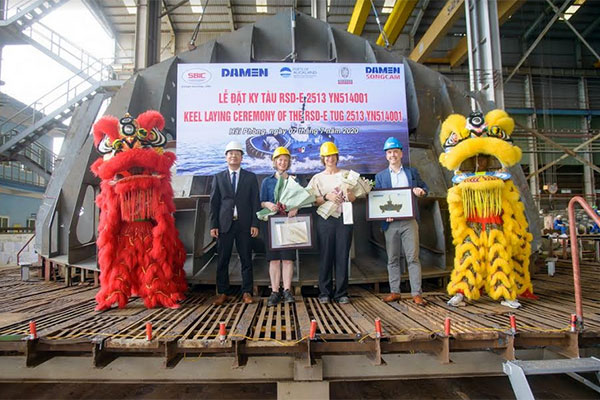 Damen Song Cam Shipyard, together with joint venture partner Song Cam Shipyard recently hosted a keel-laying ceremony for the electric RSD-E Tug 2513 that Damen is building for the Ports of Auckland, New Zealand.

This is a notable milestone for a very notable vessel – the RSD-E Tug 2513 is the world’s first fully electric tug with 70 tonnes bollard pull. It will make an important contribution towards meeting Ports of Auckland’s goal of being a zero emissions operation by 2040. With 80% of electricity in the country already cleanly generated, the tug will complete a green energy cycle in the ports.

Joris van Tienen general director of Damen Song Cam Shipyard said: “We are very excited to make a start on the construction of this innovative vessel. We are also very proud to be maintaining our schedule during this challenging time when the coronavirus pandemic continues around the world. This is due to the enormous efforts our staff have gone to in order to ensure a safe working environment.”

Following a popular vote in which people were invited to select a name for the new vessel, the Ports of Auckland’s RSD-E Tug 2513 will be named Sparky. Over half of the 8,000 people who participated in the election voted for the name. – TradeArabia News Service