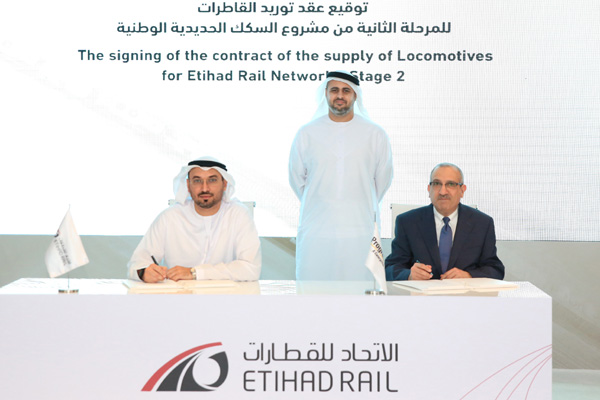 Etihad Rail, the developer and operator of the UAE’s national railway, said it has awarded a contract to Chicago-based Progress Rail Locomotive to supply locomotives for the country’s nationwide rail network.

One of the world’s biggest manufacturers of diesel-electric locomotives, Progress Rail Locomotive is a unit of leading construction equipment manufacturer Caterpillar.

This strategic supply will help Etihad Rail expand its fleet to 45 locomotives, over six times of its current fleet strength of seven locomotives, said a statement from the Emirati group.

The signing of the contract follows the awarding of all civil works contracts for Stage Two of the national railway network, the launch of construction works of Package A of Stage Two, and the award of a contract to build a series of freight facilities for the rail network, underlining the company's consistent and strong performance to complete one of the biggest and most important infrastructural projects in the country, it stated.

Etihad Rail said as per the deal, Progress Rail will design, manufacture, test, and ship 38 EMD locomotives especially designed to withstand the high temperatures and humidity of the Gulf region.

Additionally, the locomotives fleet will be equipped with a state-of-the-art air filtration system that filters sand from the air intake and pulse cleaning systems, ensuring effective and efficient operations while passing through desert areas.

On the deal, Sheikh Theyab said: "In the year of '2020: Towards the next 50', we are moving forward in completing all the necessary components for this national project that contributes to the UAE's progress and enhances the country’s prestigious global position."

"Our advanced locomotives fleet will serve the needs of the customers of this national strategic project, which will transform the transport industry in the country and the region," he added.

Progress Rail said the locomotives feature powerful motors and will be supported by advanced emission reduction technology, reducing carbon emissions by 70-80 per cent.

These locomotives are designed to haul a 100-wagon train, which can replace 5,600 on-road truck trips per day, it stated.

"This agreement increases the fleet of Etihad Rail to 45 heavy 4,500 HP locomotives, which are among the most powerful locomotives in the region," remarked Sheikh Theyab.

"Since Etihad Rail became operational in 2016, the company’s current fleet of seven locomotives has contributed to decreasing the number of truck trips on the roads of Al Dhafrah by more than one million, with up to 28 million tonnes of granulated sulphur transported from sources at Shah and Habshan to the processing and export point at Ruwais," he added.-TradeArabia News Service