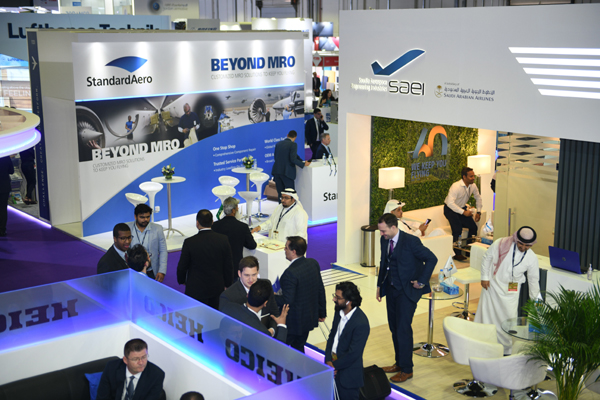 More than 5,000 trade visitors attended Aircraft Interiors Middle East (AIME) and MRO Middle East to interact with the 330 exhibitors and attend the IFEC Seminars taking place on the show floor.

Exhibitors have been thrilled with the events with many already committed to return for next year’s edition which include MRO service provider Sanad Aerotech from the UAE, the leading MRO in Saudi Arabia Saudia Aerospace Engineering Industries (SAEI), French Batiflex flooring manufacturer Gerflor and German aircraft cabin electronics supplier KID-Systeme. In addition, some companies including Aerospace Technical Services and Honeywell have increased their space for next year’s event.

Mohammad Al Falasi, Aerospace director of Mohammed Bin Rashid Aerospace Hub, presented an overview of the project and showcased its benefits and solutions to the industry, including the including recently launched projects such as Supplier Complex, Helicopter Centre, and Office and Retail.

“MRO Middle East is one of the most prestigious and important events in the Middle East,” said Al Falasi. “It attracts of our potential clients, as the majority of the big aviation companies are part of the show.”

Chair of the IFEC Seminars, Rick Lundstrom, editor of PAX International, said: “The topics discussed were at the cutting edge of the industry and the agenda spanned the whole IFEC supply chain, from the satellite providers and content providers to case studies of airlines and of course passenger experience.”

“AIME and MRO Middle East has always been popular for its dedicated position – the only one of its kind in the Middle East region,” said Caryn McConnachie, Aerospace director of show organisers Tarsus F&E LLC Middle East. “Seeing the response from exhibitors and visitors is gratifying, and demonstrates that the aircraft interiors and MRO sectors are still booming in the Middle East, driven not just by the fleets of the big Middle Eastern airlines, but also by the many smaller airlines in the region.”

“We’re so pleased at the success of MRO Middle East 2020,” said Lydia Janow, managing director/Events, Aviation Week Network. She added: “The demand from exhibitors to return in 2021 just reinforces our belief that this event brings a necessary platform to the industry in the Middle East and further afield.”