UMEX and SimTEX conclude with $204m in deals 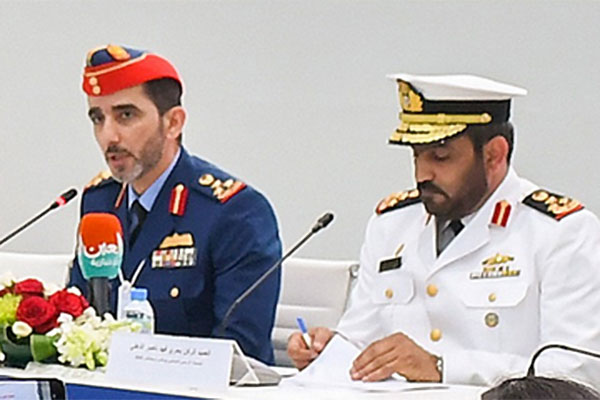 UMEX and SimTEX 2020, organised by the Abu Dhabi National Exhibitions Company (Adnec) in collaboration with the General Headquarters of the UAE Armed Forces, provided international visitors, including regional government delegations, civil entities and other sector-specialised agencies and organisations, with an overview of the latest innovations, technologies and security equipment.

The exhibitions addressed the most prominent fields in which artificial intelligence and unmanned vehicles and systems are used, in order to achieve goals that serve the environment and humanity alike.

Major General Staff Pilot Ali Mohammed Musleh Al Ahbabi, chairman of the Higher Organising Committee of UMEX and SimTEX 2020 and the accompanying conference, said: “We witnessed significant growth in the numbers of visitors and the number of deals that were signed, in addition to the great willingness of international companies to participate along with the organisation of several huge events in conjunction such as the Mohamed bin Zayed International Robotics Challenge organised by Khalifa University and the Series of Artificial Intelligence Competitions organised by the Ministry of Education, which confirms the leading global position that the exhibitions have reached during a short period of time.”

Al Ahbabi added: “UMEX and SimTEX are in line with the UAE's vision and Strategy for the Future, to promote the advancement of innovation and support the goals of the ‘2020: Towards the next 50’ initiative by elevating future technologies, which affect economy, education, infrastructure, and healthcare industries across the UAE. The events also promote the UAE’s position as a global hub for technology and innovation, in line with the global trends towards embracing the Fourth Industrial Revolution.”

Humaid Matar Al Dhaheri, managing director and group chief executive officer, Adnec said: “The 4th and largest edition of UMEX and SimTEX cemented its leading and prestigious position at various local, regional and global levels. Both exhibitions play a major role in promoting UAE’s status as an international hub for technology and innovation in line with the global trends toward embracing the Fourth Industrial Revolution.”

“The 4th edition of both exhibitions and accompanying conference achieved record results, including; increase in the number of exhibiting companies to 166, with a growth rate of 38 per cent compared to the previous edition in 2018, and local exhibiting companies have increased to 66, which count for 40 per cent of total exhibitors.

A total of 11 deals were signed during the third day of the exhibitions with a total value that exceeds Dh124 million.

Al Bannai also confirmed that a contract was signed with "State Foreign Trade Enterprises" (Ukraine) to provide technical assistance for drones at a value of Dh3,041,244 and "International Golden Group" to purchase drones worth Dh33,352,936 dirhams, and Al Fattan Shipbuilding Company to purchase maritime targets on behalf of the General Headquarters (GHQ) of the UAE Armed Forces at a value Dh18,183,830.

Other events taking place are the Mohamed Bin Zayed International Robotics Challenge, MBZIRC, organised by Khalifa University and the Series of Artificial Intelligence and Robotics Competitions.

The MBZIRC was launched in 2015 as a major international robotics competition that will be held in Abu Dhabi every two years, offering prizes worth a total of USD 5 million.

Challenges addressed in the MBZIRC 2020 included capturing and neutralising intruder UAVs, extinguishing a series of simulated fires, and prompt response in emergencies in urban high-rise buildings. A total of 34 teams and nearly 500 researchers, representing the best robotic systems laboratories and accounting for 10 percent of 100 international universities, were involved in these challenges.

As for the "Series of Artificial Intelligence and Robotics Competitions", launched in 2015, and its 6th edition, which is witnessed the participation of more than 6,700 Emirati school students, was organised with the aim of building a sustainable educational platform that plays a major role in activating robot laboratories and promoting innovation, cooperation and international competition in the field of robotics and artificial intelligence, and raising the level and scale of global participation in the field of advanced skills in the areas of creative and technological design.

Competitors from various educational levels of UAE public and private school students at the state level replaced engineering books and technology sites to participate in the 6th edition of the Series of Artificial Intelligence and Robotics Competitions. All participating students diligently worked to develop the coding language, fix robotic arms, install cameras, print 3D palm trees among others, with the aim of winning the competitions and finding the best solutions to contemporary problems and winning the title "Champion of the Series".

This category is strategically designed to engage all students, from kindergarten to university levels, making the UAE the only country around the world to organise these three international competitions under one roof.