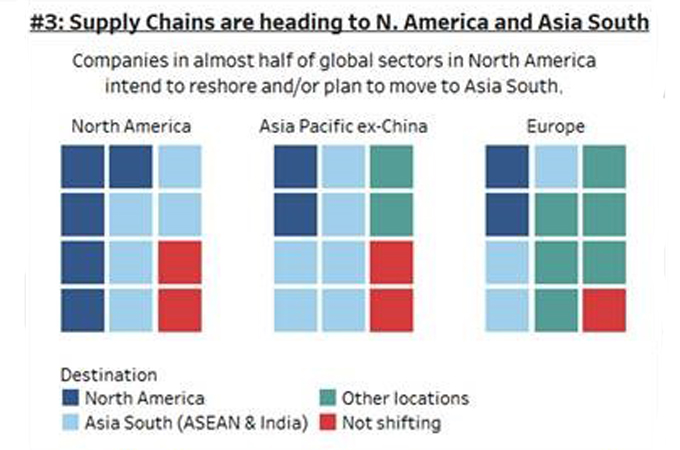 Supply chains for 'global' sectors with $22 trillion in market cap are moving, with South East Asia, India and North America as the preferred destinations, says the report. Companies in 50 per cent of global sectors in North America are intending to 'reshore', according to the report.

The report said that for many years it has been generally accepted that jobs that had moved from developed market (DM) economies to emerging markets (EM) would never come back, and that supply chains would continue to be increasingly global and complex.

However, more recently there have been hints of a reversal of that trend and the BofA report shows new evidence of that reversal.

In a survey of the bank's analysts, who cover 3000 companies, BofA Global Research found that companies in more than 80 per cent of 12 global sectors ($22 trillion market cap) in each of North America, Europe and Asia-Pacific (excluding China) have implemented or announced plans to shift at least a portion of their supply chains from current locations. Granted, most of these relocations are small compared to their installed base, but the breadth of the shift suggests that the trend of globalisation to localisation is real.

The report added that it is striking that there are so many reasons why companies are re-assessing their supply chains. Importantly, some reasons are financial, but not all. On the financial side, tariffs are obvious, but newer automation has also meaningfully narrowed the labour cost differential that made the original outsourcing so attractive, and, in addition the tax arbitrage has narrowed. On the non-financial side, national security is a growing factor, as are the environmental, social and governance (ESG) concerns of high carbon footprints associated with long supply chains and potentially problematic employment practices. In the view of BofA Global Research, these movements are "tectonic": slow moving, persistent with major changes to the business environment for global companies.

Not surprisingly, South East Asia and India were the planned destinations for half of North American and Asian supply chains. Much more surprising was that companies in about half of all global sectors in North America declared an intent to 'reshore'. This was particularly true for high-tech sectors and industries for which energy is a key input. If borne out, this could represent the first reversal in a multi-decade trend, added the report.

While the breadth of this shift is striking, the depth is moderate at present. Many firms
appear to be experimenting with a ‘China Plus’ strategy where they are keeping existing
chains largely in place, while running ‘pilot’ programs in alternative locations. Over the
next 12-24 months, we expect the success (or failure) of these pilots to help determine
the velocity of future change, the report said.

The report noted that investors are not fully prepared for this tectonic shift. The bank's analysts suggest that the US could be a significant beneficiary of this process, while Chinese firms are perhaps most at risk.

Even more striking, the report found almost universal intent to use automation. This suggests BofA Global Research's forecast of a doubling in industrial robots to 5 million units by 2025 may prove conservative, with bullish implications for capex and manufacturing, added the report.