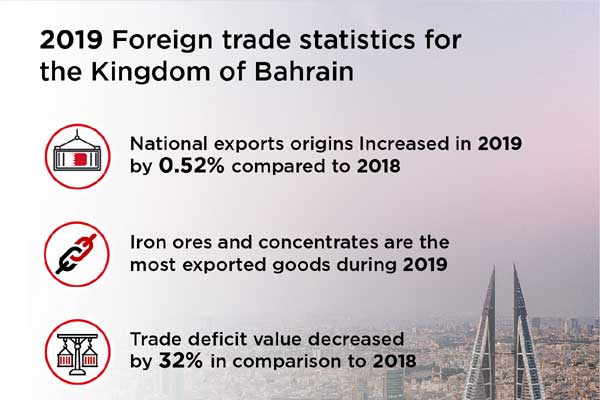 The top 10 countries accounted for 68 per cent of the value of imports, with the remaining countries accounting for just 32 per cent, said the foreign trade report by iGA for the year 2019, encompassing data on the balance of trade, imports, exports (national origin), and re-exports.

Non-agglomerated iron ores and concentrates emerged as the top product imported into Bahrain with a total value of BD380 million ($1.008 billion), while aluminium oxide was second with BD340 million ($902.06 million), and four-wheel drive cars third with BD206 million ($546.5 million).

The trade balance, the difference between exports and imports, recorded a deficit totalling BD1.892 billion ($5.019 billion) during 2019 compared to BD2.793 billion ($7.41 billion) for the previous year, an improvement of the trade balance by 32 per cent, the report said. – TradeArabia News Service