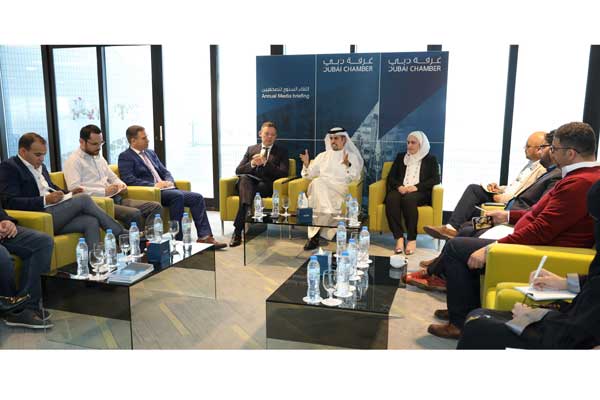 Dubai Chamber, a non-profit public organisation, announced that a total of 18,260 new member companies joined the organisation in 2019, marking a year-over-year increase of 28 per cent.

The total membership rose 9 per cent over the same period to 245,000, a statement said.

Dubai Chamber also revealed during its annual media briefing held earlier today (January 27) that it achieved 96 per cent smart transformation of its core services in 2019 as it processed nearly 1 million transactions electronically during the year.

As a result of its smart transformation push, the chamber recorded an 81 per cent drop in visits to its branches last year.

Between 2016 and 2019, Dubai Chamber implemented 90 per cent of its Dubai Paperless Strategy plans and saved 23 million papers, resulting in Dh50 million ($13.61 million) in cost savings. Following the introduction of smart attestation services in the first quarter of 2020, the chamber expects its smart transformation rate to increase further to 98 per cent.

The number of international delegations received by Dubai Chamber increased 33 per cent year-over-year in 2019 to 2,456 and 37 countries were represented by visiting delegations. The chamber held meetings with over 4,596 visiting delegates in 2019, up 31 per cent from 2018.

International expansion was a top priority for Dubai Chamber in 2019 as it opened new representative offices in Buenos Aires, Argentina and Shenzhen, China in 2019. Currently, the chamber operates 11 offices across Africa, Eurasia and Latin America, and plans were announced last year open a new office in Mexico in the near future.

Hamad Buamim, president and CEO of Dubai Chamber of Commerce and Industry, described 2019 as a pivotal year for the Chamber marked by membership growth, international expansion, new initiatives, achievements and milestones which accelerated Dubai’s smart transformation and enhanced its proactive approach to keeping pace with the evolving needs of Dubai’s maturing business community.

Dubai’s position as a global business hub has strengthened over the last year, Buamim explained, as reflected in the higher number of international delegations received by the Chamber, which he said reflects a growing interest among foreign investors and companies who are keen to explore business opportunities in the emirate.

Buamim highlighted the active role played by Dubai Chamber in developing and implementing initiatives to support the Dubai stimulus plans, enhance economic competitiveness and improve ease of doing business in Dubai. In 2019, Dubai Chamber stepped up its business advocacy efforts with the launch of the International Advisory Council, a council joined by Fortune 500 companies in Dubai, which supports the Chamber as it works with the newly formed Dubai Council to boost business activity in Dubai.

On a national level, Dubai Chamber participated in meetings where it provided members of business groups and business councils a platform to share their feedback and views on market conditions. As a result of these meetings, the Chamber reviewed several government service fees and made recommendations to reduce some existing fees that apply to businesses in the UAE.

The Dubai Chamber Business Advocacy Committee reviewed 42 drafts throughout its 45 meetings and 24 meetings held by its sub-committee in 2019. The committee’s recommendations and findings are sent to the Supreme Legislation Committee in the Emirate of Dubai.

As an Official Expo 2020 Dubai Partner, Dubai Chamber will leverage the Expo platform to expand Dubai’s trade links with other countries around the world and build new bridges of cooperation between different business communities. The chamber will host 33 business forums and events during Expo 2020 Dubai that are expected to attract over 20,000 government and business leaders from around the world.

The largest events to be organised by Dubai Chamber at Expo 2020 Dubai are the inaugural Global Business Forum ASEAN (2020), the next editions of GBF Africa and GBF Latin America (2021) and the World Chambers Congress 2021, while the Chamber will also host an on-site Business Connect Centre networking facility.

Dubai Startup Hub, an initiative of Dubai Chamber, supported over 7,000 startups through its initiatives, programmes and events. The Co-Founder Dubai programme and a revamped Market Access programme were launched in 2019 – giving startups access to development and growth opportunities, while the Dubai Smartpreneur Competition received 256 submissions in its fourth cycle in 2019, attracting business ideas in the areas of blockchain technology, artificial intelligence and digital transformation.

To promote Dubai as a startup destination, Dubai Startup Hub engaged with startup communities through several roadshows. More than 25 startup ecosystems, including Moscow and India, were covered in 2019. In addition, 16 Dubai Startup Hub members were given an opportunity to exhibit at GITEX Future Stars 2019 where they met with potential investors and business partners.

The legal services department hosted workshops and events at the chamber which raised awareness on a wide range of legal topics and issues impacting the business community such as Practical Approaches to Successful Franchising, the UAE's Bankruptcy Law to Documentary Credits Operations, the UAE Labour Law and the UAE VAT Law.

The Dubai International Arbitration Centre (DIAC), an initiative of Dubai Chamber providing impartial and efficient administration to commercial disputes, received 207 cases in 2019. DIAC’s new board of trustees was formed by a decree of HH Sheikh Mohammed. Board of trustees joined by legal experts and business leaders. The board outlined new plans and efforts to boost Dubai’s position as a global centre for commercial arbitration.

Dubai Chamber’s Centre for Responsible Business organised a total of 30 events  in 2019 attended by 4,442 participants representing 637 companies. Over 1,200 employee volunteers participated in Dubai Chamber’s Give & Gain Week 2019, dedicating 4,700 hours and benefitting 1,200 individuals in the process.

The University of Dubai, an initiative of Dubai Chamber, reached another milestone as it became the first LEED certified net-zero energy building in region and achieved LEED Platinum Certification under the Existing Building Operation and Maintenance category.

Around Dh5.4 million ($1.47 million) was invested by Dubai Chamber into a solar project to secure the certifications – an investment that is expected to save the university Dh1.2 million during the first year of the project’s operation. – TradeArabia News Service