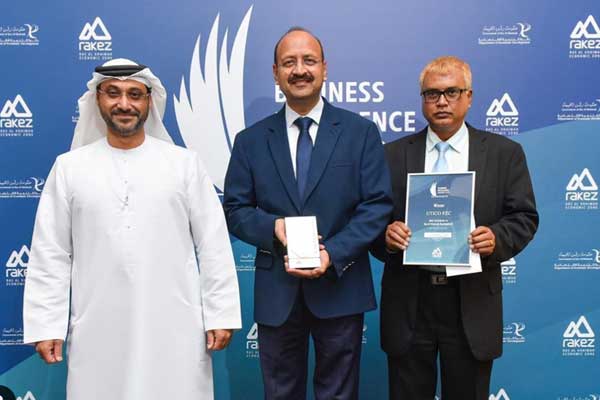 Ras Al Khaimah-based Utico, the largest full services private utility in the UAE and one of the largest developer in the Middle East, said it has been honoured as the `Best Contributor to RAK Development’, at the Annual Rakez Business Excellence Award 2019.

The award recognises Utico’s significant contribution to the economic and social development of Ras Al Khaimah and to the gross domestic product (GDP) of the emirate as well as to neighbouring emirates, said a statement from the company.

Richard Menezes, CEO of Utico, said: “The award has inspired us to further enhance our relevance to the communities and the country we serve, the UAE.”

Utico has invested Dh2.5 billion in the UAE infrastructure, including in water and power plants and networks, and is poised to increase that to over Dh4 billion over the coming three to five years.

Utico’s sustainable development model with zero government guarantees and lower end consumer tariffs has resulted in billions of dirhams of savings for the UAE as well as removed billions of dollars of contingent liability on the balance sheet of the UAE which is a known direct impact from Government guarantees for any utility development project as followed currently.

Ali Darwish, regional general manager of Utico, said: “It is an honour to be recognised by RAK Government for our role in the growth of the industrial, real estate, tourism, farming, and other development sectors of the emirate and neighbouring emirates, which has been possible with the immense support of the Ras Al Khaimah Government and other official entities as well as from Rulers of neighbouring emirates.”

Utico serves over 600 industries in Ras Al Khaimah as well as close to 10,000 residential units in gated communities/other areas, two major sea ports, apart from serving consumers/customers in the neighbouring emirates of Umm Al Quwain, Ajman and Sharjah from its facilities in RAK.

Utico is actively in discussion with the Sharjah Government to set up a large desalination plant at Hamriyah which will be the world’s largest IWP without Government Guarantees and have the lowest tariff without it.

As part of supporting farmers in Ras Al Khaimah, Utico supplies free and subsidised water to hundreds of farmers now covering over 500 farms, and the target is to serve 3,000 farms.

Menezes said in 2020, Utico will enhance its focus on sustainability initiatives earmarking a significant portion of its investments for relevant projects that will contribute to the protection of environment through renewable energy developments on its own, as well in partnership with the government, it stated. – TradeArabia News Service