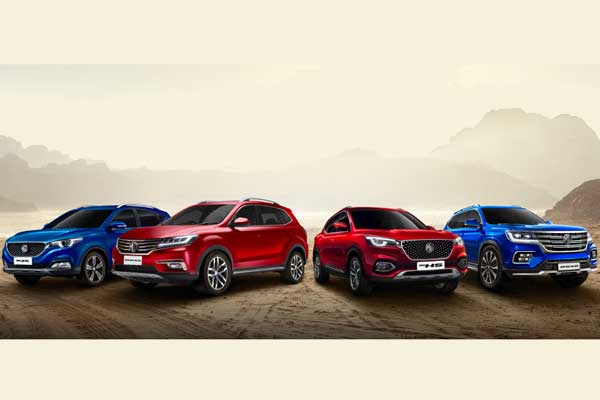 The brand enjoyed significant growth in all countries, led by the popularity of its compact sedan models, and RX5 and ZS SUVs. In just 12 months, the company doubled its market share across the Gulf, and has set an ambitious target to break into the top 10 of manufacturers by the end of 2020, said a statement.

In its biggest regional market, Saudi Arabia, MG registered a year-on-year increase of 114 per cent. Just two years after the brand was reintroduced to the kingdom in partnership with Taajeer Group, MG now enjoys a market share of almost 2 per cent.

In the UAE, MG’s number two market, the company increased sales by 186 per cent in the first full year of its relationship with local partner, Al Yousuf Motors.

Impressive performances were recorded in both Oman and Qatar, with around four times as many customers buying MG cars compared to the previous year. In both cases, the recent appointment of new distributors was central to this impressive growth. MG’s third biggest market, Kuwait registered a double-digit percentage increase, while sales more than doubled in Bahrain where the brand enjoys a market share of 2.2 per cent.

On top of this, MG Motor expanded its distributor network by adding Lebanon to its portfolio, with 2020 set to see additional countries join the network.

The second half of the year saw MG launch three brand new models - the MG5, MG RX8 and MG HS - which are all set to make a major impact in 2020. It also launched its first full electric SUV, the MG ZS EV, toward the end of the year in the UAE and Saudi Arabia.

Key to MG’s 2019 success has been the rapidly increasing awareness of the brand, in line with its strategy to become a household name. This was helped by major sponsorship deals, such as those with world-famous Liverpool Football Club and Saudi team, Al Ahli.

Tom Lee, managing director of MG Motor’s Middle East operations, said: “2019 was a landmark year for MG in the Middle East. It has been a source of great pride to see so many customers taking to the roads in MG cars, and justifies our efforts, and those of our fantastic partners, to develop our network across the region in the past year alongside the introduction of three exciting, great value models.”

“Looking ahead to 2020, our strategic focus will be centred on the customer experience and providing a first-class aftersales experience. We also plan to introduce new, state-of-the-art technologies into the MG range, maintaining our reputation for being at the forefront of the automotive industry when it comes to the latest technological developments,” he added.

Additionally, it has expanded its regional parts operations, with a bigger parts centre that allows the company to more efficiently service the growing demand from its customers. And for ultimate peace of mind, all MG models come with a six-year or 200,000 km certified warranty, it stated. – TradeArabia News Service