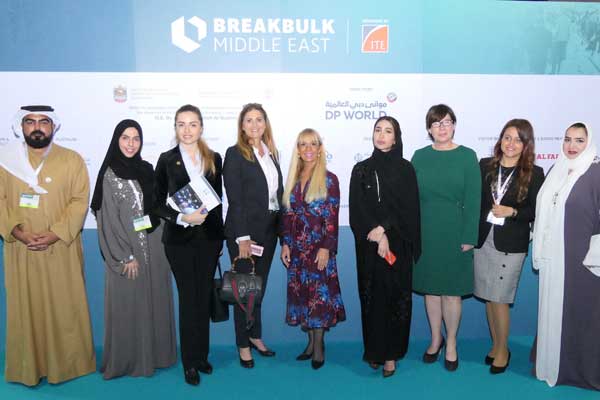 Breakbulk Middle East has unveiled its plans to launch a new ‘Women in Breakbulk Breakfast’ initiative at the upcoming fifth edition of the event next month in Dubai, UAE.

The two-day conference and exhibition is set to take place on February 25 and 26, at the Dubai World Trade Center.

Breakbulk Middle East will once again be held under the patronage of Dr Abdullah Belhaif Al Nuaimi, the UAE Minister of Infrastructure Development and the Chairman of the Federal Transport Authority (FTA) for Land and Maritime.

After last year’s successful partnership with WISTA (Women’s International Shipping & Trading Association) Arabia – UAE, an international networking organisation that supports women at the management level in maritime, as well as trading and logistics; this year Breakbulk Middle East has also formed an alliance with AWIMA (Arab Women in Maritime Association), an IMO (International Maritime Organization) mandated assembly focused on encouraging and empowering Arab women, as well as highlighting their effective role in the maritime sector.

Engineer Hessa Al Malek, executive director of Maritime Transport at the Federal Transport Authority for Land and Maritime, and President of AWIMA, said: “The primary mission of AWIMA is centered around enhancing the national and regional recognition of Arab women as resources for the maritime industry.”

“Breakbulk’s global portfolio of events offers international exposure that we hope to strategically leverage through Breakbulk Middle East, and ultimately we aspire to achieve the full scope of our strategic objectives one at a time,” Al Malek said.

“The UAE seeks to carry out a pioneering role among the countries of the world in all fields. Thus, ensuring the cultivation of female development within all industries, with a particular focus on maritime, is essential to support the country’s economy. Active contributions from key industry players at industry enhancing events such as Breakbulk Middle East will pay great dividends in the grand scheme of the country’s long-term goals,” Al Malek added.

Echoing similar sentiments, Jasmin Fichte, managing partner at Fichte & Co, and founder and president of WISTA Arabia-UAE, said: “Upon beginning my career in this industry, a lack of female leaders was visibly apparent. Since my initial entrance, this narrative has gradually shifted due to a number of factors. Empowerment organizations such as WISTA and AWIMA, female inclusion initiatives similar to last year’s IMO World Maritime Day Theme, and events like Breakbulk Middle East that have been willing to give women a platform to achieve and showcase excellence, have all been major components of this sustainable turnaround.”

“This is why we are thrilled to once again support an event that is demonstrating a willingness to innovate so that female leaders can emerge and shape our industry in a new era where adaptability is required to evolve,” she added.

Over the years, Breakbulk’s global portfolio of events has actively strived to address and overcome topical industry issues; topics like digitalisation in a rapidly changing landscape, attracting the next generation workforce to carry the industry forward, and increasing the strength of female leadership have all been key in elevating the sector to new heights. Accordingly, the new Breakbulk in Breakfast initiative has been administered as an opportunity for women to inspire, and seek inspiration from, one another to carry this momentum into the next decade.

Leslie Meredith, marketing director, Breakbulk Events & Media, said: “Women are a growing force in the world of project cargo, represented in every sector of the industry. The Women in Breakbulk Breakfast is a meeting place for women to share their career stories, both the highs and lows, and offer advice to one another.”

“This is why we are grateful to have the support of such well recognised female empowerment organisations, and we encourage ambitious career driven women to become a part of this group. Whether you are new to the industry, an industry veteran, or anywhere in between, there is significant value that can be extracted from this experience for all,” she said.

“The door for registration for the fifth edition is now open, and we welcome all industry leaders and experts to join us by registering through our official platforms,” Meredith concluded. – TradeArabia News Service