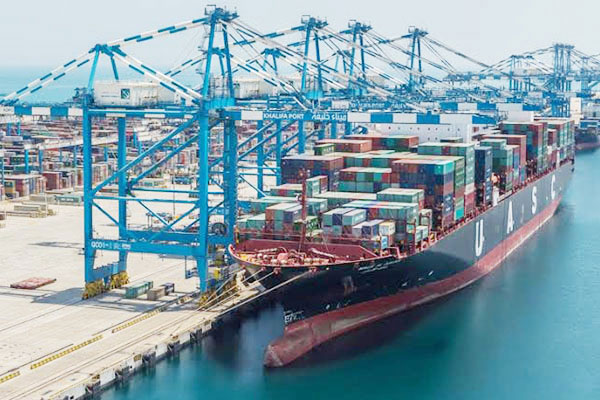 Abu Dhabi Ports, the master developer of commercial and community ports, has announced plans to start Dh4-billion ($1.08 billion) worth of expansion projects at the Khalifa Port mainly aimed at boost its handling capacity.

The scope of work includes development of South Quay and Khalifa Port Logistics at an investment of Dh2.2 billion besides a Dh1.6 billion expansion work at Abu Dhabi Terminals.

The South Quay development which will be completed by Q1 of 2021 comprises a three-km quay-wall with 18.5 m along-side draft for general cargo, ro-ro and bulk usage. It will also include eight berths, and 1.3 million sq m of terminal yard, said the statement.

The Khalifa Logistics expansion, for multi-purpose usage, will encompass a 3.1-km quay wall with 8-m draft, 15 berths and land plots, which can be tailored to individual customers.

These two expansion projects will create more than 2,800 direct and indirect jobs and contribute over Dh3.2 billion to the emirate’s GDP by 2025, it stated.

The expansion at ADT will include an extension of the quay from 1,400 to 2,265 m and an addition of 10 new ship-to-shore quay cranes - effectively doubling ADT’s handling capacity from 2.5 million to 5 million TEUs.

Additionally, the new investment will include significant technological advancements, such as fully automated truck loading and discharge, said the Emirati port developer.

With this capacity expansion project in place, Khalifa Port will see its container handling capacity jump from current 5 million to 7.5 million TEUs, which sets it firmly on the path towards its 9 million TEU milestone over the next five years.

In another development, Abu Dhabi Ports said after only one year, the CSP Abu Dhabi Terminal (Cosco) has now shifted from its trial operation phase to being commercially fully operational.

The deep-water, semi-automated container terminal includes the largest Container Freight Station in the Middle East and positions Abu Dhabi as the regional base for Cosco’s global network of 37 ports.

Group CEO Captain Mohamed Juma Al Shamisi said: “As global trade volumes increase over time, the world’s leading port operators must think decades ahead in their planning and execution. Through strategic collaboration with partners and top industry players, such as ADT, MSC, China’s CSP, and Autoterminal Barcelona, Khalifa Port is developing in a sustainable manner and has become one of the fastest growing ports in the world."

“Khalifa Port continues to expand and innovate to meet the diverse needs of our business partners, while driving forward the UAE’s economy and its strategic partnership with China, its largest non-oil trading partner,." he stated.

"The volumes of cargo that we will move over the coming decades will serve as testament to the farsighted vision of Abu Dhabi’s leadership. Khalifa Port is not only a global maritime hub but also an important contributor to the connectivity of China’s Belt and Road Initiative (BRI),” he added.

Abu Dhabi Terminals CEO Ahmed Al Mutawa said: “With ADT and its customers and stakeholders being the major growth drivers at Khalifa Port since its establishment seven years ago, we remain the strongest supporters of Abu Dhabi Ports’ vision for further expanding its position as the preferred and the most technologically advanced trade and logistics hub in the region and beyond."

To stay at the forefront, ADT will continue to make significant investments in infrastructure and the implementation of the latest technological innovations to continuously enhance our value offering to our customers and stakeholders.

The latest investment of Dh1.6 billion, which doubles our handling capacity to 5 million TEUs by 2020, will see ADT take its place among the top 40 largest container terminals in the world, and positions us well for future growth.”

"Cosco continues to view Abu Dhabi as a logistics and trade hub of tremendous strategic global importance, as its location bridging East and West, combined with its commitment to excellence in infrastructure development, make it an international port of significance and an important point along BRI in the region," stated AlBusaeedi.

"We look forward to the complete optimisation of the CSP terminal, raising cargo volumes to new highs and bolstering trade between markets far and wide,” he noted.

Mohamed Eidha Tannaf Al Menhali, Acting Director, Khalifa Port, said: “The South Quay and Khalifa Logistics expansion delivers enormous competitive advantage for Khalifa Port and Kizad, as industrial producers and cargo owners shipping to global markets value deep-water access and the ability to base operations on prime land in investor-friendly Abu Dhabi. Continuing to expand and develop our infrastructure remains fundamental to Khalifa Port’s efforts to realise that objective, and to the marked increase in our container traffic.”

At the start of June 2019, Khalifa Port became the first GCC port capable of receiving calls from fully-laden Capesize vessels at its quay. The milestone itself was inaugurated with the arrival of the Cape Taweelah coming from the Republic of Guinea carrying a shipment of bauxite ore destined for Emirates Global Aluminium’s (EGA) Al Taweelah alumina refinery.

In order for Khalifa Port to accommodate Capesize vessels, the facility’s approaches were deepened from 16.5 to 18.5 m and widened from 250 to 280 m.

Featuring state-of-the-art maritime infrastructure, including 23 (current) of the world’s largest ship-to-shore quay cranes, Khalifa Port will be the first in the UAE to be linked to the new Etihad Rail network, which is currently under construction, said the statement from Abu Dhabi Ports.

With the ability to serve the largest ships at sea, and flexibility for future expansion, the port currently allows the handling of all of Abu Dhabi’s container traffic with a current annual capacity of 5 million TEUs, it stated.

When all development phases are completed, Khalifa Port is expected to increase its capacity for container volumes to 15 million TEUs by 2030, it added.-TradeArabia News Service