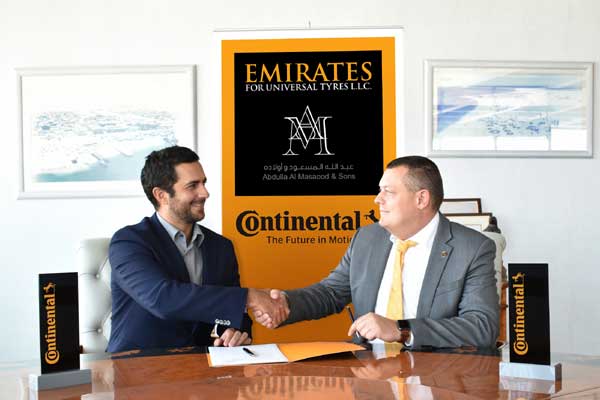 Continental, a leading German tyre and automotive technology company, has reappointed Emirates for Universal Tyres (EUT) as the sole distributor for Continental in the UAE, extending the partnership until December 31, 2023.

The agreement highlights Continental’s expanding commitment to the region and will see the partnership through to its 15th year, said a statement from the company.

The ceremony was also attended by Jon Ander Garcia, regional manager for Middle East and Africa and Shaun Smith, general manager at Emirates for Universal Tyres.

The signing of the new agreement is the latest in a series of developments that have seen the German brand significantly enhance its support for customers across the UAE and Middle East.

Earlier this year Continental opened a new parts warehouse in Jebel Ali, allowing smoother supply of passenger car and commercial tyres to retailers. This followed last year’s successful launch of the new Generation 6 range of tyres, which have been developed specifically for the region.

Karel Kucera, managing director of Continental Middle East, said: “We are very pleased to be continuing our agreement with EUT who have been a key partner of ours in the Middle East now for the last 10 years.”

“They have been with us at key moments during our growth over those years. Most recently that includes things such as our groundbreaking sponsorship of the 2019 AFC Asian Cup in the UAE as well as the development and launch of the regionally-tailored Generation 6 tyre range. I am confident that we will continue doing great things together in the UAE,” Kucera added.

In addition to this, the distributor has also supplied Continental products and training to 200 independent retailers across the Emirates, equipping hundreds of thousands of vehicles from supercars and SUVs to commercial trucks and heavy-duty fork lifts.

Shaun Smith said: “We are proud to be a part of the Continental family and to have contributed to the growth of the brand in the UAE over the years. We helped launch the brand in the region and have equipped thousands of vehicles with premium Continental tyres that have, in turn, supported a safer driving environment in the Emirates.”

“To be able to go on doing this fundamentally important task is an honour and we look forward to growing the Continental brand further,” he added. – TradeArabia News Service