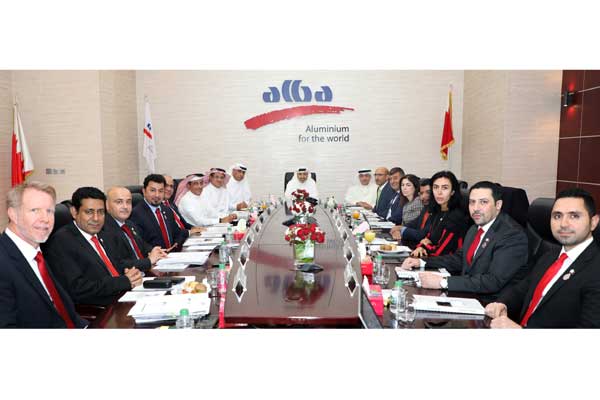 In a statement issued during the fourth quarterly board meeting for 2019, held on December 1 at Alba, he lauded His Majesty King Hamad Bin Isa Al Khalifa for officially inaugurating the project last month.

Shaikh Daij said: “November 24 was a historic day for Alba as we were honoured with the presence of His Majesty King Hamad bin Isa Al Khalifa, the King of Bahrain, for gracing us with his presence to officially inaugurate Line 6 Expansion Project and accompanied by HRH Prince Salman bin Hamad Al Khalifa, the Crown Prince, First Deputy Prime Minister and Deputy Supreme Commander.”

His Majesty’s official inauguration of Alba’s mega project places the company in the lead within the aluminium industry with its transformation - making it the world’s largest smelter ex-China.

"I also take the opportunity to thank all our partners on this project: Emirates Global Aluminium (EGA) for using the proprietary DX+ Ultra Technology in Line 6, Bechtel - EPCM contractor for Reduction Line 6, GE and GAMA Consortium - the EPC contractor for Power Station (PS) 5 and Siemens - the power distribution system contractor for PS 5 and all the contractors involved in this project, specifically to the local contractors who have all contributed towards the success of this project,” he added.

Shaikh Daij noted that with Line 6 fully on stream, the company is now actively seeking to expand its products portfolio and increase its sales with a major emphasis on the US market.

“In addition, we aim to have a strong finish in 2019 as our production will top 1.35 million tonnes for the first time in our history thanks to the safe and progressive ramp-up of Line 6, while at the same time, we intend to achieve 15 million working-hours without Lost Time Injury by year-end 2019,” he added.

During the meeting, Alba’s board of directors approved the minutes of the previous meeting, which was held on September 25 as well as reviewed the reports of the Executive Committee, Board Audit Committee and the Nomination, Remuneration and Corporate Governance Committee.

In addition, the board approved the 2020 annual operating plan and Q3 2019 financial statements.

Updates were also given by the executive management on safety, operational and financial performance on the back of current market conditions and Project Titan – Phase IV as well as overall Industry Outlook.