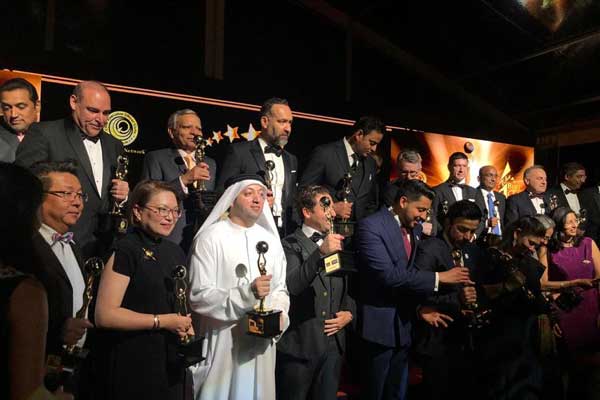 The Sharjah Airport International Free Zone (SAIF Zone) has invited businessmen taking part in The Burj CEO Awards & Business Summit 2019 to invest in the free zone and take advantage of its customer base, which is among the largest in the world from one central hub, with an access to more than 2 billion people.

While participating at the summit, held recently in Mauritius along with more than 200 CEOs representing major international companies, SAIF Zone showcased its attractive investment facilities, calling on investors to come to Sharjah and invest in the zone’s lucrative opportunities where they can grow and expand like never before.

Addressing the summit besides 60 CEOs from around the world, Saud Salim Al Mazrouei, director of SAIF Zone, affirmed that SAIF Zone has grown into a leading hub for doing successful businesses, drawing more than 8000 companies from 160 countries.

We have changed the conventional concept of free zones into cities within cities, providing investors and their companies with everything they need, Al Mazrouei said.

He added: “In line with Sharjah's economic diversification strategy, we seek to deliver competitive advantages and unparalleled incentives including easy and quick procedures of doing business, 100 per cent foreign ownership of businesses, and 100 per cent repatriation of capital and profits.”

“This is in addition to 100 per cent corporate or personal income tax exemptions, 100 per cent import and export tax exemptions, and easy access to seaports on the Gulf of Oman and the Arabian Sea. The zone now operates on a global scale and is a gateway not only to the GCC markets but also to the Middle Eastern, Southeast Asian and African markets.”

During his business and bilateral meetings held on the sidelines of the summit, Al Mazrouei stated that SAIF Zone is on standby to activate bilateral relations, stimulate business partnerships and support the global economy. We have always been keen to create a conducive environment, where investors are provided with the best services that ensure the sustainability, development and expansion of their businesses, he underlined.

Concluding his speech, SAIF Zone director called for developing a shared vision to galvanize cooperation and partnerships and serve the interests of the global economy, stressing that the summit has been a perfect opportunity to exchange expertise and review solutions to challenges facing the business sector.

In yet another achievement added to Sharjah’s global roster, SAIF Zone has been awarded the Global Free Zone of the Year 2019, during the event. The award is granted to the best free zone in the world selected by the board of CEO Clubs Network.

Al Mazrouei was also presented with the CEO Appreciation Award, in recognition of his contribution and achievements as the Director of SAIF Zone and Hamriyah Free Zone (HFZ) by the same panel of CEO Clubs Network.

“It's a real feather in our cap to be named the Global Free Zone of the Year 2019. This great achievement has proved that our constant investment in services and facilities besides keenness to enrich the experience of investors is the best way for success and excellence,” Al Mazrouei noted.

It is worth noting that the UAE is the 5th largest exporter to Mauritius with total exports of $194 million. Investments from the UAE into the Mauritian economy represent 4 per cent of total FDI to Mauritius and the main sectors of interest being real estate, manufacturing, and the hospitality industry and business services.

Also, the bilateral agreements signed between both countries have played a major role in boosting joint investment flows, where the FDI inflows from the UAE to Mauritius has averaged $16 million annually over the past five years. The improved air connectivity also played an important role in developing bilateral trade and doubling the number of UAE tourists to Mauritius, it stated. – TradeArabia News Service