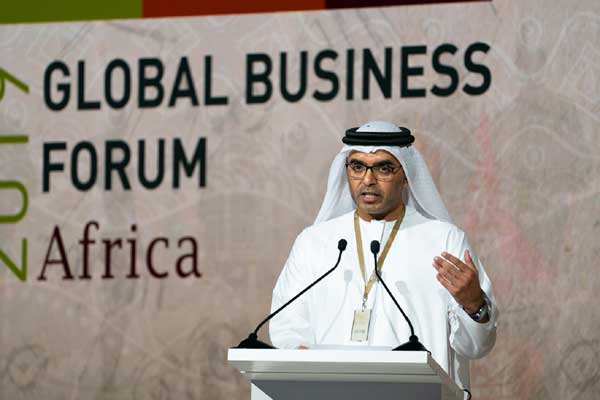 Dubai’s non-oil trade with Africa will exceed Dh1 trillion ($272.24 billion) for the period extending from 2011 until the end of 2019, asserted Majid Saif Al Ghurair, chairman of Dubai Chamber.

Al Ghurair also noted that it had already reached Dh926 billion ($252.09 billion) in the 2011-2018 period. He made the announcement in his opening speech at the fifth edition of the Global Business Forum Africa (GBF Africa) in Dubai as the two-day forum kicked off on November 18, asserting that the African continent is a key partner in Dubai’s plans to diversify its economy.

Organised by Dubai Chamber of Commerce and Industry (Dubai Chamber) under the patronage of HH Sheikh Mohammed bin Rashid Al Maktoum, Vice President and Prime Minister of the UAE and Ruler of Dubai.

In his opening speech, Majid Saif Al Ghurair highlighted the long-established UAE-African relations in all fields, and Dubai’s status as Africa’s gateway to new markets building on its strong presence on the global economy map and its role in advancing international trade.

Al Ghurair noted that over the course of its five previous editions, GBF Africa has become a leading platform for expanding UAE-Africa economic cooperation and forging partnerships across different markets.

“With the support of H.H. Sheikh Mohammed bin Rashid Al Maktoum, the forum has seen considerable growth in terms of significance and number of participants, bringing together heads of state, policymakers and business leaders to identify exciting business prospects emerging across the continent,” Al Ghurair explained.

“The African market is a market of strategic importance to Dubai and a key focus of Dubai Chamber’s expansion strategy and we are closely monitoring developments and the business climate in Africa to identify growth opportunities available for our members,” Al Ghurair explained, underlining the huge potential to boost UAE-Africa trade and investment flows following the launch of the African Continental Free Trade Area (AfCFTA) earlier this year.

Al Ghurair asserted that Dubai is well-equipped to support Africa’s next phase of growth and development, especially as the emirate offers valuable expertise in several key sectors, including logistics services, infrastructure, retail, tourism and finance.

Held under the theme ‘Scale Up Africa’, GBF Africa 2019 is among the world’s largest events focusing on Africa’s economic potential, highlighting business and investment potential and opportunities on the continent, it stated. – TradeArabia News Service