Over 500 cars on display at Dubai motor show 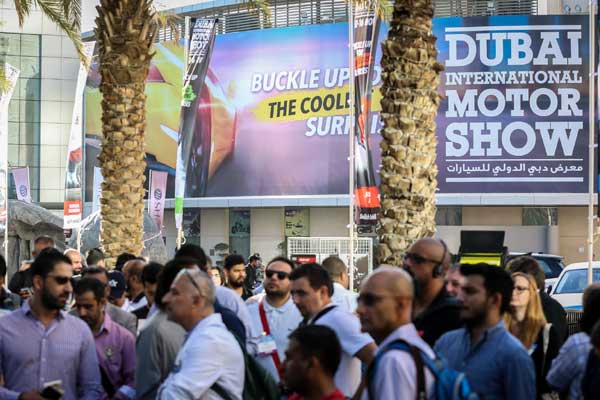 More than 500 cars are on display at the ongoing 15th edition of the Dubai International Motor Show (DIMS) in Dubai, UAE.

DIMS opened its earlier this week to crowds of motoring enthusiasts and families who were seeking to catch a glimpse of this year’s best and most glamourous car launches and motoring-themed entertainment, said a statement.

Organised by the Dubai World Trade Centre (DWTC), the show is being held until November 16.

The show has brought to the region, for the first time ever, a number of launches, including Nissan’s new concepts exclusively designed for customers in the Middle East; the Gazelle Storm, powered by a 4.8L 6-cylinder powerhouse, and the Navara Gazelle which offers unparalleled off-road experiences.

UAE-based STREIT Group, one of the world’s largest armoured vehicle manufacturers revealed the Streit Shaman 8x8; the amphibious automobile delivers a horsepower of 146 and 350Nm torque, ideal for tackling all terrains, even water.

General Motors brought forth an array of models from Chevrolet, GMC and Cadillac, showcasing six new reveals with 36 models in total across all three brands; Chevrolet made regional debuts of the 2020 Corvette Stingray, the fastest and most powerful in Stingray history, the all-new 2020 Onix saloon, and the 2020 Chevrolet Captiva crossover; Cadillac revealed its all-new CT5 sports saloon; and GMC showed off its all-new GMC Sierra line-up.

Using their state-of-the-art 3D modelling studio, Italdesign, brought to life students’ visions of the cars of the future. Sponsored by CAFU, the MENA region's first-ever fuel on-demand mobile application, the ‘My Car of the Future’ competition demonstrated how – by endlessly refining their digital capabilities – Italdesign’s team of creatives can quite literally sculpt a car from start to finish in a 3D virtual environment, allowing unrivalled opportunities in vehicle design and alteration.

The competition called on students aged 6-13 from across the city to submit drawings of what they imagined the car of the future to look like. The chosen students will also be going home with a small model of their designed car, the all-new Need for Speed game on Xbox, a poster of their design, and 2 grandstand tickets to Abu Dhabi F1.

Antonio Al Asmar, general manager of CAFU, said: “We’re proud to be sponsoring this initiative because we are one of the companies innovating the oil and gas sector, and it makes a lot of sense for us to help kids grow their creativity, their entrepreneurship and their innovation skills. We want to be sure the youth can see their dreams are not so far from reality.”

Christian Bolognesi, press office manager, Italdesign, said: “This project was a demonstration of Italdesign’s range of expertise, showcasing the finest technologies in automotive design. It was a fantastic feeling to see the students’ faces when their designs were unveiled.”

Nicky Stimpson, mother of Zac Stimpson, whose design was brought to life in 3D by Italdesign, said: “I am so thrilled that he is one of the finalists; he was so keen to enter because he has loved cars his whole life. His idea started with flying as the main factor in his design and then he was inspired by the falcon so the bonnet is a beak, the spoiler in the back is the tail of the falcon and of course the wings and the headlights are the claws of the falcon, with the indicators inside as well.”

The show’s daily ‘Visit & Win’ raffle draw saw, one lucky winner receive Dh10,000 ($2,722) cash prize, and two winners walked away with Traxxas RC cars. Visitors to the show can enter the raffle every day for a chance to win. – TradeArabia News Service