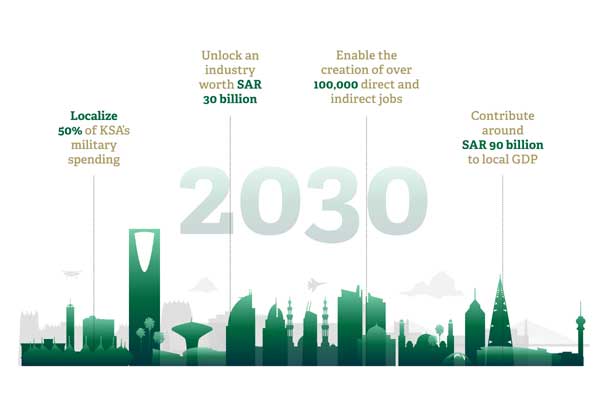 The General Authority for Military Industries (GAMI), the regulator, enabler and licensor of Saudi Arabia’s defence and security industry, is on track to achieve its goal of localising 50 per cent of the kingdom’s military expenditure over the next decade.

GAMI, at a press conference in Riyadh, announced its achievements over the past two years in the local sector. It said the industry is on track to achieve its mandate under Vision 2030.

During a press conference, Ahmad A Al Ohali, Governor of GAMI, expressed his pride in the work accomplished by the teams at GAMI who have laid the foundation for a promising local defence industry.

“Under our acquisition pillar, we have already started reaping the benefits of purchase power consolidation and the developments made in national military procurement processes,” said Al Ohali. “As a result, we achieved significant added value at financial, commercial, legal and operational levels, including savings of around SR900 million ($239.98 million).”

For the first time in Saudi Arabia’s history, GAMI launched an online portal through which investors can apply for three types of operating licenses in the local defence and security industry: military equipment manufacturing, military services and the supply of military equipment and services.

The authority presented licenses to some of the first applicants including Saudi Arabia Military Industries (Sami), Advanced Electronics Company (AEC), Al Tadrea Manufacturing Company (TMC), Sondos Advanced Manufacturing Company, and the Saudi Company for Advanced Technologies. The licensing portal has logged 180 registrants, 95 of which have applied for licenses.

The authority also announced the launch of its Industrial Participation Program (IPP), developed in cooperation with key industry players including local and international OEMs. IPP will be a cornerstone for localization efforts in the defence and security industry, providing attractive incentives to manufacturers who are committed to adding value, transferring technology and providing opportunities for local Saudi talent in the sector.

“Since its establishment, GAMI has identified localisation opportunities worth SR4 billion ($1.06 billion) in supplier contracts, which will be realised over the coming years,” Al Ohali said.

GAMI’s research and technology pillar is responsible for building local capabilities and talent through educational and training programmes, as well as supporting SMEs and directing research and development endeavours towards priority areas for the local defence and security industry through collaborations with local and international universities and research centres.

Enabling the development of a sustainable local defence and security industry would have a significant impact on the kingdom. “Building the industry will primarily provide stronger autonomy, national security and military readiness,” Al Ohali said. “From an economic perspective, localising 50 per cent of Saudi’s military expenditure will see us building an industry worth more than SR30 billion ($8 billion) by 2030, directly contributing around SR90 billion to the kingdom’s non-oil GDP.”

“In terms of job creation, we expect the industry to generate around 40,000 direct jobs and more than 60,000 indirect jobs through ancillary industries, most of which will be undertaken by Saudi citizens,” he added.