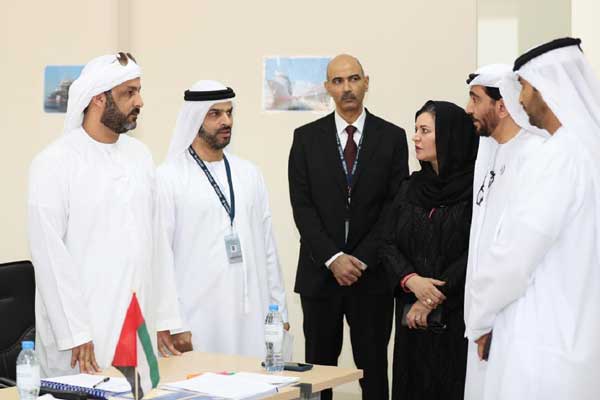 The move is part of FTA’s continuing efforts to strengthen relations with various entities and help contribute in the efforts to reinforce the UAE’s maritime sector, said a statement.

During the visit, both parties discussed the role of Abu Dhabi Ports in enhancing the UAE’s maritime sector, the significant contributions that it has made as part of the economic plans of the emirate and its support for the directives issued by the emirate's wise leadership to build a diversified, sustainable and integrated economy based on innovation and knowledge.

Captain Al Shamsi explained the effective role of Abu Dhabi Ports in providing world-class integrated services, including its contribution towards enhancing trade and logistic services and promoting Abu Dhabi as a leading hub for trade, industry and investment.

He highlighted the Academy’s role in enhancing maritime sector’s contribution to promoting growth, by qualifying and equipping cadres with relevant skills and knowledge that are necessary to meet the sector’s immediate and future need for expertise.

During their visit to the Academy, the delegation was briefed on its advanced and specialized teaching and training equipment and tools, including simulators that mimic real work environments, in order to equip candidates with hands-on expertise and knowledge needed to operate efficiently in actual work scenarios.

A detailed explanation of the educational programs and courses accredited by the FTA, the Maritime Agency and the Coast Guard of the United Kingdom, the International Association of Navigational Aid and Lighthouses, and the Lloyd's Register was also presented before the delegation.

Engineer Ahmed Mohammed Shareef Al Khoori praised the efforts of Abu Dhabi Ports and their contributions to the development of the maritime sector in the UAE.

He particularly lauded the achievements of the ports in the field of maritime training and building national capacities in maritime sector activities and their contribution in preparing the next generation of sailors and future leaders to engage in the maritime sector.

He shared that these achievements have been made possible in part through the establishment of the Abu Dhabi Maritime Academy, which is being run in cooperation with best international maritime academies and equipping it with the best educational means and resources.

Meanwhile, Al Khoori pointed out that the FTA’s interest and support for the Abu Dhabi Maritime Academy stems from the importance of the Academy in providing the labour market with specialized human resources capable of leading the UAE’s maritime sector.

Al Khoori revealed that the FTA seeks to strengthen its efforts with all entities in the UAE, especially those concerned with the maritime sector. He explained the importance of working together to prepare an integrated file that reflects the UAE’s leading position in the maritime field and includes its achievements and significant contributions to upgrading the maritime sector as well as the growing position of the UAE in the global maritime industry.

He pointed out that Abu Dhabi Ports is a major supporter of the maritime industry and enjoys an important position as a leading hub on the map of maritime trade and logistics in the region and the world.

“We are keen on reinforcing our relations with the government and private entities to support the UAE’s nomination for Category B Membership of the International Maritime Organization's (IMO) Council,” he said.

“Abu Dhabi Ports is a major contributor to this file because of its significant role in strengthening the maritime sector in the country. We commend the efforts of Abu Dhabi Ports to develop the maritime sector in the UAE and their contribution to the economic growth and their support to the policy of diversification of the sources of income of the UAE. We are also committed to support the efforts of Abu Dhabi Ports, which seeks to establish advanced infrastructure and achieve a sustainable and integrated maritime industry,” he added.

He highlighted the progress achieved by the UAE in the field of land and sea transport and infrastructure.

“We, at Abu Dhabi Ports, consider FTA as one of our most important partners that enable us to achieve many important achievements and successes and launch large projects. We are keen to strengthen these strong ties to serve the aspirations of both sides, in line with the goals of the UAE Vision 2021 and Abu Dhabi Economic Vision 2030,” he added.

Captain Maktoum Al Houqani said: “We, at the Abu Dhabi Maritime Academy, thank the Federal Land and Maritime Transport Authority for paying us this important visit and sharing valuable insights. With such strong support and encouragement from leaders of the maritime sector in the UAE and the region, we will continue to provide training programs in all areas of maritime education, incorporating technological advancements in the sector.”

The UAE intends to submit its file for re-nomination for Category B Membership of the IMO Council, as it seeks to increase its efforts in establishing advanced infrastructure and achieve an integrated and sustainable maritime industry.

The country has prepared an integrated file supported by a sophisticated maritime infrastructure, world-class maritime capabilities and a leading position in international maritime trade, as well as its ongoing initiatives as part of its endeavours, to become an advanced maritime hub, it stated. – TradeArabia News Service