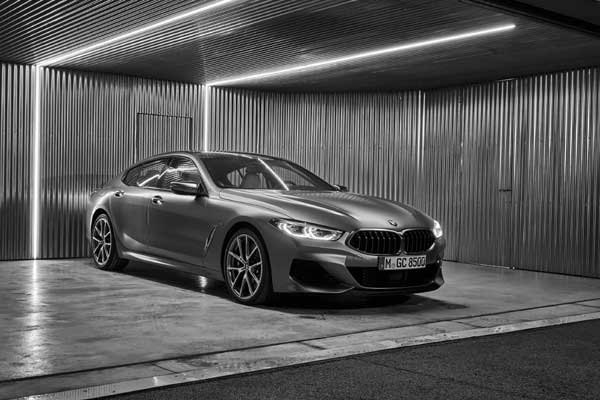 AGMC, the official importer of BMW Group vehicles for Dubai, Sharjah and the Northern Emirates, is showcasing a total of 10 BMW vehicles at the 15th edition of the Dubai International Motor Show, being held in Dubai, UAE.

The event opened today (November 12) and will run until November 16, at the Dubai World Trade Centre.

The vehicles on display include two of the newest additions to the popular X-range – the BMW X7 M50i and the BMW X6 M50i.

They are joined by the BMW 8 Series Gran Coupe, the BMW i3s – making its regional launch - and the BMW Individual M850i xDrive Coupe Night Sky.

The BMW X7 M50i and the BMW X6 M50i are the perfect continuation of the automotive trend that began with the original BMW X5 in 1999.

The X7 has the presence, exclusivity and spaciousness of a super high-end SAV. Featuring state of the art handling, enhanced power and a greater size than any of its X-range predecessors, the BMW X7 M50i is the pinnacle of the fast-growing luxury SAV market.

As the latest generation of BMX X6, the new M50i delivers the agile and versatile driving properties of a SAV with the head-turning looks of a sports coupe.

Visitors to the Dubai International Motor Show over the next few days will be thrilled with AGMC’s showcase of the BMW 8 Series Gran Coupe.

Embodying exceptional sporting capabilities, the Gran Coupe represents a level of automotive power and flair that is rarely seen in the luxury sedan market.

Inspired and conceptualised from a two-door sports car, the Gran Coupe is packed with dynamic potential; its longer wheelbase and model-specific chassis tuning create an unmistakable balance between sports performance and ride comfort.

BMW’s standing at the forefront of major advances in mobility, technology, performance is highlighted with the official regional launch of the new BMW i3s. The car is expected to draw huge attention at this year’s Dubai International Motor Show.

The BMW i3s is the most advanced and power efficient BMW i3 and boasts an increased range of an impressive 260-280km with 80 per cent charge capable in just 42 minutes.

Also making its debut in the region exclusively at the Dubai International Motor Show is the BMW Individual M850i xDrive Coupe Night Sky - a stellar, one-off version of BMW’s most popular luxury sports car that is truly out of this world.

Originally unveiled in Munich in January this year to celebrate an exceptionally intense meteor shower, the BMW 8 Series Night Sky features controls made from meteoritic material, extraterrestrial surface patterns, an illuminated constellation on the centre console and 3D-printed components.

A unique geometric meteorite pattern – known as the Widmanstätten structure – can be found on the car’s exterior mirror caps, the front splitters for the side air intakes, hand stitched into the headliner and the centre console’s trim finishers as well as milled into the brake discs.

The BMW X5 40i M Sport on show at the event is presented in a stunning Tanzanite Blue exterior finish with Coffee interior with the BMW M5 Sedan boasting a Champagne Quartz finish with Tartufo Merino on the inside.

Also turning heads at the event thanks to its Mineral White and Black Alcantara interior was the BMW 320i M Sport, while the BMW 750Li xDrive M Sport featured a Donnington Grey paintwork with Cognac Nappa Leather on the inside. Finally, the BMW Z4 M40i proved to be popular with attendees who were attracted by its San Francisco Red exterior and Black Dakota interior.

Ayhan Olcer, CEO AGMC, said: “Over the last 15 years the show has grown into the largest, most important and most respected auto event in the region and beyond.”

“AGMC is proud to participate in this wonderful occasion and to showcase 10 of BMW’s most impressive, powerful, unique and innovative motor cars ever produced,” Olcer said.

“Attendees at the show will have the privilege to see for themselves not only vehicles making their debut in the Middle East but some superb examples of BMW’s most popular models,” Olcer added. – TradeArabia News Service