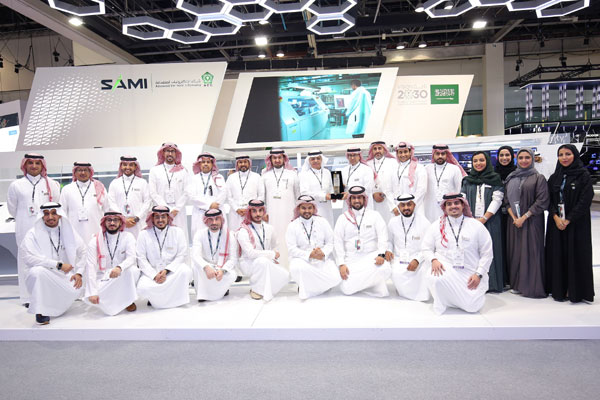 In addition to highlighting its state-of-the-art digital suite of cybersecurity, e-services, e-Health, and smart solutions, the company signed three MoUs that are aimed at supporting the Vision 2030 goals of enabling a sophisticated digital infrastructure in the kingdom.

The company inked agreements with Megvii, Labiba, Nutanix and the Ministry of Communication and Information Technology’s Yesser e-Government Program during the five-day event. The collaborations will further strengthen AEC’s technical expertise in the fields of Artificial Intelligence, process-automation, and other key areas, supporting the company’s drive to further develop Saudi Arabia’s indigenous capabilities through the transfer and localisation of technology.

Moreover; Liferay, a US company that makes software that helps companies create digital experiences on web, mobile and connected devices, announced AEC as the first Gold Partner in Saudi Arabia.

Dr Andreas Schwer, CEO of Sami, visited AEC’s stand on the first day, where he met senior officials and was briefed on AEC’s participation and the showcased digital solutions.

During the event, AEC welcomed a number of senior officials and industry leaders to its stand, including Majid Al-Hogail, Minister of Housing; Dr. Khalid Bayari the assistant Minister of Defense for executive affairs; Dr. Abdullah Al-Ghamdi, the head of the National Information Centre, Turki Aldakhil, the Saudi ambassador to the UAE, Engineer Fahd Al Solaie, the undersecretary of digital transformation and information technology, Ministry of Justice, and Mariya Didi, the Minister of Defence of the Republic of Maldives.

Abdulaziz Al-Duailej, president and CEO of AEC, said: “The growing success of GITEX year after year bears testimony to the success of the region in establishing itself as a thriving hub for technology and innovation. Representing Saudi Arabia at the event, showcasing its vision for a self-sufficient technological ecosystem and highlighting its long-term plans to further accelerate its digital transformation journey has been an excellent experience for AEC. We look forward to capitalising on the opportunities that surfaced during these five days of networking and knowledge-exchange for the future growth and development of the information and communications technology industry in the kingdom.” - TradeArabia News Service