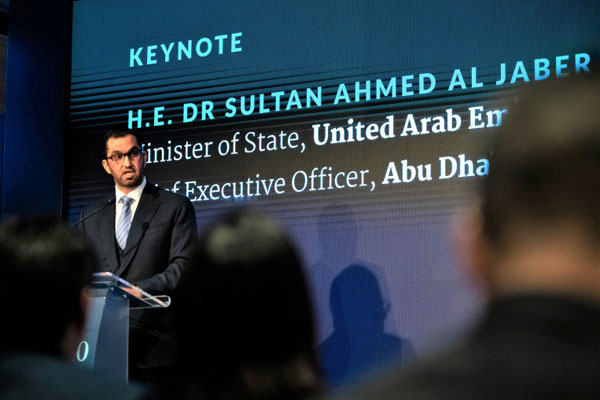 He began his remarks by addressing the impact of global economic trends on energy demand and outlined Adnoc’s response to the fast-evolving energy landscape.

"As we convene today, short-term energy demand has continued to soften in response to current downside risks in the global economy. However, over the medium and long-term, the outlook remains positive, solid, and robust," he stated.

"By 2040, three times the amount of energy consumed by all of Europe will be added to global energy demand. In the face of current economic headwinds, we need to control costs, while staying focused on capital efficiency and targeted long-term investment. At Adnoc, that is exactly our approach. We are pursuing a balanced smart growth strategy that is cautious on costs while remaining bullish on long-term demand," said Dr Al Jaber.

"We are greatly expanding our oil production capacity and unlocking vast reserves of natural gas. By tapping into gas caps, undeveloped reservoirs, and unconventional resources, we are on track to achieve gas self-sufficiency and in time, become a net gas exporter," said the top official.

"In addition, we are making sizeable investments downstream to create within the UAE, one of the largest refining and petrochemical complexes in the world. This will provide the foundation for a fully integrated derivatives and manufacturing hub located at the gateway to the most promising growth markets," he added.

Dr Al Jaber went on to outline how Adnoc is leveraging its strong AA+ standalone credit ratings to optimise its balance sheet and attract long-term investors. Adnoc, he said, is leaving no stone unturned to unlock and maximise value from its operations.

Adnoc is making smarter use of its capital and more proactively managing its portfolio of assets, he stated. As a result, Adnoc has struck a series of strategic equity partnerships across its value chain in the last twelve months, he added.

These transactions include a $5-billion pipeline infrastructure investment with BlackRock, KKR, the Abu Dhabi Retirement Pensions and Benefits Fund; a joint venture with OCI that created the world’s largest exporter of nitrogen fertiliser; the acquisition of a ten percent stake in VTTI, the global storage terminal owner and operator; and a strategic equity partnership with Eni and OMV that established the foundation for a world-class refining and trading platform.

Dr Al Jaber noted that Adnoc is open to new partnerships that make economic sense. "We will develop additional opportunities for investors and partners focused on value and who share our values," he added.

"We lead the industry with the lowest methane intensity. We produce among the least carbon-intensive barrels, and after launching the Middle East’s first commercial-scale carbon capture utilisation and storage facility, we are expanding the programme six times," remarked the top official.

"Our goal is to capture at least 4.3 million tonnes of CO2 annually by 2030. That is the equivalent of the amount of CO2 captured by five million acres of trees, or a forest the size of Wales," he added.

Dr Al Jaber also emphasised the importance of attracting and retaining talent for the oil and gas industry and highlighted the crucial link between innovation and securing young talent.

"At Adnoc, we have found that our ability to bring young people into our company is closely linked to how innovative we are as a business. We are applying the latest technology from Artificial Intelligence to Big Data across our operations. This enhances performance and enables our people to make quicker business-critical decisions. And it also sends a powerful signal to prospective employees that our industry is focused on the future, not anchored in the past," stated Dr Al Jaber.

However, technology is not the oil and gas industry’s only asset, said the Group CEO.

"Our most compelling selling point is the core mission of our industry: To deliver the energy that drives the world’s economies. There are few careers that offer the same opportunity to directly impact global growth and development. In short, Oil and Gas is as relevant to that common goal today as it was when the first wells were drilled over 150 years ago," he added.-TradeArabia News Service