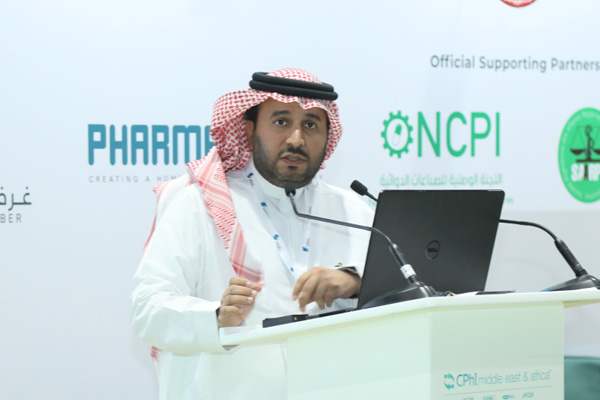 The importance of Saudi Arabia’s pharmaceutical industry in delivery of the country’s 2030 Vision was highlighted at CPhI Middle East & Africa, taking place in Abu Dhabi, UAE.

The three-day event will conclude on September 18, and is being held at the Abu Dhabi National Exhibition Centre (Adnec).

During a presentation by Dr Faisal BinDail, chairman of the National Committee for Pharmaceutical Industries, titled Delivering Saudi Arabia’s Vision 2030, a range of topics related to the pharmaceutical industry were discussed, including incentives for stimulating local manufacturing and the opportunities the emerging contract manufacturing sector present.

Dr BinDail said: “In the context of Saudi Arabia, Pharma manufacturing holds an important position in achieving the Kingdom’s Vision 2030. The regulatory body, local industry players, global companies have realised the importance of this initiative and are working towards strengthening of localised Pharmaceutical manufacturing.”

“Part of the transformation plan in the kingdom is to raise the percentage of total pharmaceutical production to 40 per cent from the current 20 per cent. The government is supportive, local companies are gearing up and the regulatory body is encouraging, facilitating and providing incentives – thereby encouraging global companies to take advantage of this opportunity,” he said.

“Moreover, there is an enthusiasm among the local players to raise their standards and provide quality affordable medicines. Saudi Arabia is one of the few countries to adopt track and trace system to curb the menace of counterfeit,” he added.

Saudi Arabia is the largest pharmaceutical market in the Middle East and North Africa (Mena) region worth $7.5 billion dollars and is expected to grow at a CAGR of around 5.5 per cent.

Dr BinDail said: “The market is dominated by branded products, as there is a preference for brands locally, but at the same time there is an opportunity for generics as well to expand.”

“Around 20 per cent of the Pharma market is locally manufactured, while 80 per cent is still imported from different countries, from the US, Europe, and different parts of the world, this is in brief how the Pharmaceutical market in Saudi Arabia currently looks like,” he added.

CPhI Middle East and Africa, which was officially opened by Sheikh Nahyan bin Mubarak al Nahyan, Minister of Tolerance. Sponsored by the Ministry of Health and Protection (MoHaP), CPhI is attracting attendees from the Middle East and Africa (MEA) - of which the Mena region accounts for 4 per cent of the global pharma market. The event is providing a showcase for over 290 exhibitors and is expected to attract more than 4,900 pharma professionals from around the world. – TradeArabia News Service