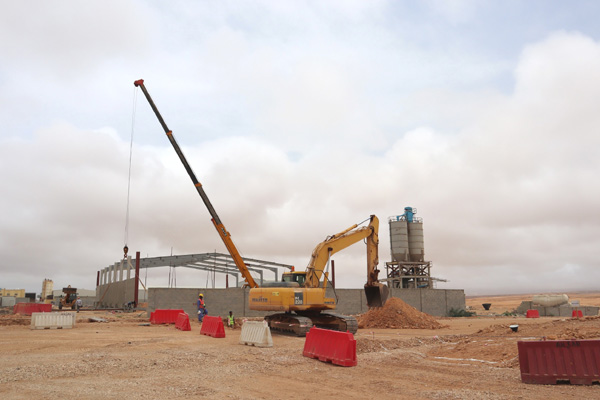 Raysut Industrial City, part of the Oman's Public Establishment for Industrial Estates (Madayn), has informed that a total of 32 investment applications of industrial, commercial and service activities were received during the first half of 2019.

Hamad bin Hamoud Al Qasabi, director general of Raysut Industrial City, said: “Among these 32 applications, nine projects have been localised. The study and analysis process of the remaining applications is underway before contracts get signed.”

“Besides, many of the existing projects at Raysut Industrial City have received additional space and they are currently working to expand their businesses and introduce new production lines,” Al Qasabi pointed out.

“We are working towards increasing this number further taking into consideration the expansion of the operating companies and factories in terms of space, production lines and capital. All these factors are promising and reassure that their products are popular in the Sultanate as well as overseas markets,” he said.

Al Qasabi also noted that Madayn is currently implementing the infrastructure development project of Raysut Industrial City (Raysut 2), which is estimated at a total cost of RO4 million ($10.39 million) and is being built on a land area of one million sq m.

He continued that the project includes the establishment of an integrated network of roads, pavements and drainage network of 7.9 km; in addition to water network of up to 8.3 km that includes irrigation systems. The project also incorporates communication and gas networks, and wastewater treatment plant with a capacity of 1,000 cu m per day.

“This project shall take into account the use of advanced technologies used for lighting, networks and service system, and is expected to be completed by the end of 2020,” he added.

Al Qasabi elaborated that when Raysut Industrial City was inaugurated in 1992, its space was approximately one million sq m at that time. By the end of 2018, the total space stood at 3,810,479 sq m.

He also emphasised on the strategic location of Raysut Industrial City in Dhofar governorate, which gives it an access to the Gulf area, and Yemeni and African markets.

“The ideal location of Raysut Industrial City gives it an adding value to attract more investments in various sectors and most importantly the industrial sector,” he stated.

He added that Raysut Industrial City, likewise the rest of the industrial cities pertaining to Madayn, aims at achieving objectives and strategies that support to achieve comprehensive and sustainable development in Dhofar governorate in particular.

“This gets achieved through focusing on diversifying sources of national income, contributing to the national economy, providing job opportunities for the national cadres, enhancing a trading environment with foreign markets, and taking advantage of the presence of strategic and major projects in Dhofar such as Port of Salalah and Salalah International Airport,” Al Qasabi remarked.

Speaking about the number of workforce in the various companies and factories based in Raysut Industrial City, Al Qasabi said that the number has touched 3,358 by the end of 2018, of which around 800 are Omanis.

He emphasised that Madayn is undertaking constant efforts to provide job opportunities for the Omani cadres in coordination with the related bodies. “Omanis are performing effectively in the production operations of industries such as pharmaceutical, food and engineering industries in the industrial city,” he said, adding: “The number of projects in Raysut Industrial City stood at 202 by the end of 2018, of which 105 were productive projects, 50 projects were allotted with space, and 47 were under construction during that period.”

“Additionally, there are ongoing efforts by Madayn in coordination with the Ministry of Oil and Gas to provide greater quantities of gas in order to meet the demands from the factories within and outside Raysut Industrial City,” he added. – TradeArabia News Service