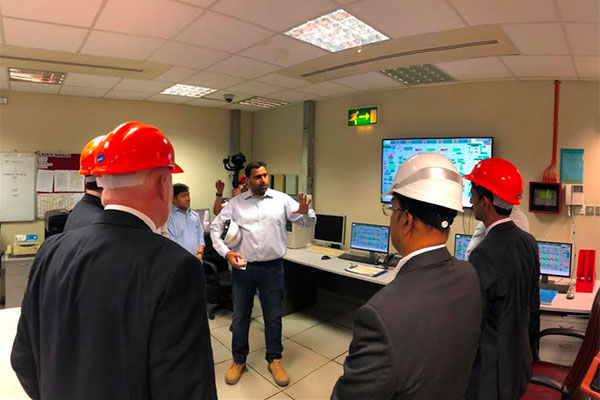 Dr Afif AL Yafei, executive vice president of the Regional Asset Management, received the delegation and took them on a tour of Bahrain District Cooling Company’s diplomatic area plant, which was commissioned in 2010 in line with the country’s efforts to contribute to the achievement of the UN Sustainable Development Goals (SDGs). It is the first district cooling plant in the region that utilizes seawater, and is significantly more efficient, reliable and sustainable as compared to conventional cooling systems.

The seawater system is comprised of a 1.5-kilometre intake line from the Manama Lagoon Area, a 1.4 kilometre outfall line to Bahrain Bay, a 14 kilometre closed loop chilled water distribution system, and an integrated central Supervisory Control and Data Acquisition (SCADA) system to monitor and optimize performance.

Bader Al Lamki, Tabreed’s chief executive officer, said: “We are delighted to have had the opportunity to demonstrate, on the ground in Bahrain, our innovative technologies and the significant benefits of district cooling in terms of efficiency, reliability and sustainability.

“Since our inception in 1998, Tabreed has been supporting numerous clients and customers across the region not only meet their cooling requirements but achieve their sustainable development objectives as well. Cooling represents up to 70% of peak energy consumption and district cooling uses only half the energy compared to conventional cooling systems, resulting in tangible benefits for our customers and governments as we collectively work towards achieving the UN Sustainable Development Goals.”

Dr Al Yafei said: “Commissioned in 2010, Tabreed’s Bahrain Plant is the first one of its kind in the region to operate using seawater, indicative of the advanced and innovative technology we have applied across our facilities. The plant serves a variety of customers from business centres to residential housing, delivering industry leading reliability, cost-efficiency, and a significant reduction in energy consumption.”

Tabreed Bahrain plays an important role in enabling its customer’s achievement of their environmental and sustainability objectives, by significantly reducing carbon dioxide emissions and energy consumption. Within the region in 2018, Tabreed contributed to saving 1.97 billion kilowatt/hours, preventing the release of 986,000 metric tonnes of CO2 – the equivalent of eliminating the emissions from 214,000 vehicles annually.

Tabreed’s operations in Bahrain alone were responsible for preventing the release of 24,500 metric tonnes of CO2, equivalent to eliminating the emissions from 5,000 vehicles annually. – TradeArabia News Service