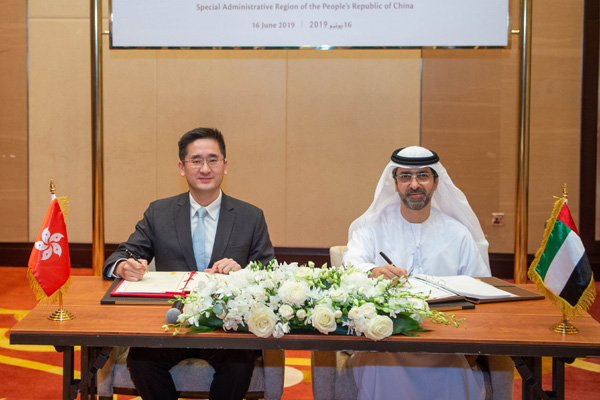 The UAE Ministry of Finance (MoF) has signed an agreement to encourage and protect investments between the UAE and the Government of Hong Kong Special Administrative Region.

The agreement was signed as part of the ministry's efforts to protect the nation’s investments abroad and attract foreign investments, said a statement.

The agreement was signed by Younis Al Khoori, undersecretary of MoF and Dr Bernard Chan, undersecretary for commerce and economic development, Hong Kong, in the presence of officials from both sides, it said.

Al Khoori highlighted the importance of investment protection and promotion agreements given their pivotal role in attracting foreign investments and enhancing the UAE's competitiveness levels.

These agreements are also in line with the country’s national development goals, and will help in diversifying Gross National Income (GNI) sources, as well as bolstering the UAE’s investments abroad.

Al Khoori said: “The signing of the Investment Promotion and Protection Agreement between the UAE and Hong Kong creates a conducive investment environment that provides guaranteed growth, expansion and protection of investments.”

“Additionally, this agreement will strengthen the investment partnership between the two countries, and will encourage government, semi-government and private sectors to forge mutually beneficial relationships,” he added.

The UAE has close ties with Hong Kong and is party to several international agreements with the latter, including the agreement on the avoidance of double taxation signed in December 2014.

The ministry continuously seeks to strengthen the UAE’s international relations to achieve sustainable economic development in the country.

The UAE is Hong Kong’s largest economic partner in the Middle East and the 18th biggest in the world.